James Karas
The Canadian Opera Company is continuing the revival of its 2006 productions of The Ring of the Nibelungs, minus Das Rheingold. Last year we saw Atom Egoyan’s production of Die Walküre and this year we are offered Francois Girard’s production of Siegfried.

One of the most striking and memorable features of the production is the set in the first act. A jumble of people, statues, miniature buildings and objects are suspended in midair above the stage. Some of the singers are lowered onto the stage by guy wires from there and you get the impression of an aerial Siegfried. More about this below. 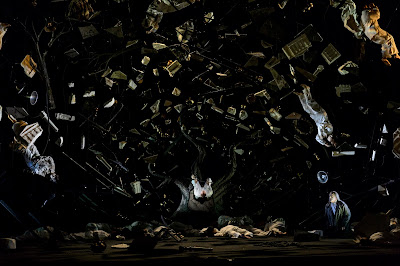 Christopher Purves (right) as Alberich in the COC production of Siegfried, 2016. Photo: Chris Hutcheson
The singing is of high caliber. German tenor Stefan Vinke tackles the demanding title role. Siegfried goes from a petulant, childish, vengeful and scornful youth at the beginning to the heroic being who finds love. Vinke acts with panache and sings dramatically and in the final duet with lyrical intensity to give us a first rate Siegfried.

American bass-baritone Alan Held is impressive as The Wanderer a.k.a Wotan. With his resonant voice, his feet firmly on the ground, he exudes authority and power amid fear of losing both.

From the bad guys, baritone Christopher Purves and bass Phillip Ens were strikingly successful as Alberich and Fafner respectively. They exuded creepy nastiness vocally and physically. The same cannot be said of Wolfgang Ablinger-Sperrhacke’s performance as Mime, the dwarf who raised Siegfried. The latter admits that he learned a great deal from Mime except how not to loathe him. Admittedly Siegfried is being a bit of a creep perhaps but I think Mime is supposed to be a slithering, slimy creature. In this production Ablinger-Sperrhacke makes him almost sympathetic. He should make him disgusting. No complaints about Ablinger-Sperrhacke’s vocal performance.

Brűnhilde’s appearance in this opera is relatively short but she comes on at the end and she and Siegfried sing the final duet that is absolutely stunning. Just listen to soprano Christine Goerke and Vinke. There is an explosion of testosterone on Siegfried’s part; discovery of divine passion, acceleration, deceleration, bursts of lyricism – this is the pinnacle of opera. You arrived at the theatre at 6:30 and were told the opera ends in five hours. After this marathon duet you wonder where the time went. 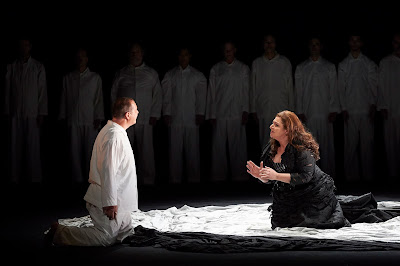 Stefan Vinke as Siegfried and Christine Goerke as Brünnhilde.  Photo: Michael Cooper
Director François Girard with Set Designer Michael Levine and Lighting Designer David Finn want an atmosphere of darkness even when, for example, Siegfried sings of the sunny summit, hails the sun that shines and Brűnhilde sees the day shining bright in the sun. There is a spot light where the happy couple sings of sunshine but there is darkness all around.

With the exception of Brűnhilde, all the characters, from The Bear to The Forest Bird are dressed almost identically in white. The Bear is lowered from above and lands behind Siegfried who is sitting on a huge stump. We are grateful for a human bear rather than an oversized teddy-bear that can look simply ridiculous.

When The Wanderer goes in search of Erda he stops by a circle of rocks from whence one would expect Erda to emerge. She does not and we find her sleeping on the floor, stage right.  A simply curious effect by Girard. But let’s give credit to contralto Meredith Arwady who has some rich low notes as the Earth goddess in a scene that is lousy on plot but rich in music.

The singing and production values are only a part of the opera and perhaps even more important is the music. No opera house should think of staging Wagner without a first rate orchestra. The COC Orchestra conducted by Johannes debus was superb.

We can discuss directorial choices until the cows come home but who has cows in Toronto anyway. The result is an overall resoundingly successful production.
_________
Siegfried by Richard Wagner opened on January 23 and will be performed seven times on various dates until February 14, 2016 at the Four Seasons Centre for the Performing Arts, 145 Queen Street West, Toronto, Ontario. Tel:  416-363-6671. www.coc.ca
Posted by James Karas at 1:16 AM