When you learn that the top floor of a big house is boarded up and nobody, but nobody is allowed to go up there, you sit up and try to figure out “why.”

That is one of the questions you ask yourself in Patrick Hamilton’s Gaslight, now playing at the Ed Mirvish Theatre. Of course, the play is a whodunit and it piles on the mysteries, drops some clues and keeps you going for a couple of hours of entertainment until there is a resolution. 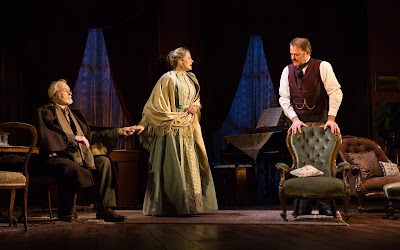 Ian McElhinney, Flora Montgomery and Owen Teale in GASLIGHT ©2016, Cylla von Tiedemann
You can set a mystery wherever you want, I suppose, but there is no better place than a large house in Victorian England. The spacious drawing room with heavy velvet curtains, dark wallpaper, walnut furniture and gaslights makes the quintessential setting for unravelling incomprehensible conduct and events.

Mr. Manningham (Owen Teale) is a patriarchal tyrant who runs his house and his wife with an iron fist. Poor Mrs. Manningham (Flora Montgomery). Just as he makes her deliciously happy by promising to take her to the theatre, all hell breaks loose when he notices that a picture has been taken off the wall. Mr. Manningham becomes furious and demands to know why she took it down and where it is.

She pleads innocence and ignorance with vehement fervour including kissing the bible. The two servants, the fetching Nancy (Emily Head) and the older Elizabeth (Victoria Lennox) kiss the bible to assert their innocence. Conclusion: Mrs. Manningham is crazy. Even she begins to doubt her sanity as Mr. Manningham threatens to bring a doctor and ship her to a loony bin.

After Mr. Manningham has gone to his club (or has he?), Inspector Rough (Ian McElhinney) arrives and he delivers some startling news about murder, robbery, strange happenings and some missing rubies. Why do the gaslights dim and what are those steps on the top floor? The plot has thickened to the breaking point and after some very considerable tension, it begins to unravel.

Flora Montgomery has the toughest role in the play. She is a woman driven to the brink of insanity by an abusive and tyrannical husband. She is terrified by her husband, abused by the maid and scared by the inspector as she tries to maintain her composure. That is a loaded role and Montgomery does a superb job.

Teale is very good as the obnoxious husband whose relationship with the maid is outside usual employment standards. He can be affable but underneath that pose there is cunning and evil. He goes from cajoler to stentorian bully and we watch him with fascination.

McElhinney gives us an affable inspector, ready with a laugh and charming approach but keenly observant. We want him on our side otherwise we may never know what is happening on the top floor.

Gaslight is a classic in its genre. Directed by David Gilmore, it provides a couple of hours of entertainment. You know a mystery is good when, during intermission, people are asking each other who they think did it.
__________