Toronto Operetta Theatre deserves credit for plugging a hole in the amusement availability gap between Christmas and New Year’s Eve. This year’s lifter-upper is Sigmund Romberg’s The Student Prince. It is an energetic and enjoyable production done, as usual for TOT, on a modest budget.

If the “Overhead moon is shining,” and you are in your “Golden Days” of “Student life” and “Drink, drink, drink” when the garlands are bright deep in your heart in Heidelberg then you are in operettaland or in Karlsberg watching The Student Prince. If all of those things are happening to you and you are not at the St. Lawrence centre, you are delusional. 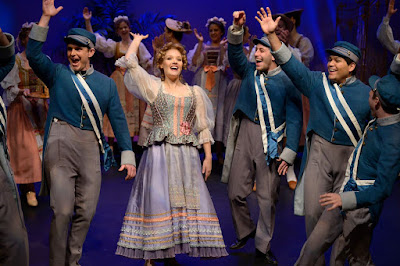 Stefan Fehr, Jennifer Taverner, Adam Norrad and Ernesto Ramirez. Photo Gary Beechey
The classic 1924 operetta is based on Old Heidelberg, a play by German playwright Wilhelm Meyer-Förster with book and lyrics by Dorothy Donnelly. Director Guillermo Silva-Marin takes advantage of the beautiful melodies, the rousing ensemble songs, the comic elements and the romantic entanglements to provide an entertaining evening at the theatre.

The student prince of the title, sung by Mexican tenor Ernesto Ramirez, is sent to Heidelberg University to study. He meets some rowdy students and Kathie, the innkeeper’s lovely niece.  I will let you fill in some of the blanks about what happens after that. Ramirez has lovely voice and he can sing piano and even better forte where he belts out his lyrical phrases. My only complaint about him is his enunciation. He can use a bit more drilling to cease obscuring parts of some words.

Soprano Jennifer Taverner is the winsome Kathie – lively, sweet-voiced and the type of girl a prince will fall for, put her “Deep in my heart” and dream of living happily-ever-after with her alone.

Three members of the female vocal ensemble take on solo roles as well and do a good job, namely: soprano Carrie Parks as the haughty Grand Duchess Anastasia, mezzo soprano Dina Shikhman as Princess Margaret, a woman who knows how to get her man, and mezzo soprano Katerina Utochkina who has a similar talent.

The operetta has its share of comic characters from the overbearing but ineffective prince’s valet Lutz, (played struttingly by Sean Curran) to the waiter Toni (Ryan Moilliet) to the students and members of the Saxon Corps. Some of the comic business misfired but the audience enjoyed the comedy overall.

Bass-baritone Curtis Sullivan sang with his usual resonance, the role of the humane Doctor Engel.

Derek Bate conducted the small orchestra, almost a band really, which nevertheless gave a spirited performance of the score.

Toronto Operetta Theatre is in its thirtieth year and it bears repeating that it is the conception, creation and continuation of Guillermo Silva-Marin. For The Student Prince, he is credited with stage direction, décor and lighting design. The production succeeds because of his talents but suffers from shortage of funds. More funding would provide better decor from the few items to indicate a palace antechamber, an inn garden and a palace. A bigger orchestra would help and a more plush theatre would be a definite asset.

He does a great deal with the sparse resources at hand. Toronto owes him a great debt for bringing and keeping operetta in the city almost single handed.

TOT’s next production will be Los Gavilanes by Jacinto Guerrero, a zarzuela dating from 1923, that, as happens so often, will be getting its Canadian premiere.
________

The Student Prince by Sigmund Romberg opened on December 27, 2015 and will be performed five times until January 3, 2016 at the Jane Mallett Theatre, St. Lawrence Centre for the Arts, 27 Front Street East, Toronto, Ontario. Tel:  (416) 366-7723. www.stlc.com or www.torontooperetta.com