Seminar is a play about writing, becoming a writer, drink, drugs, ambition, sex and the life of a certain segment of New York society that exists mostly in the imagination of hoi polloi.

Theresa Rebeck’s 2011 play has five reasonably well-developed and distinct characters who engage in some or all of the above-noted practices with wit sarcasm, meanness, lust, pain and brutality. In other words, they are very entertaining. 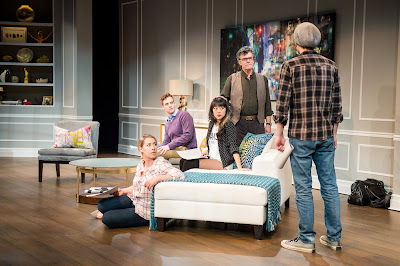 The cast of Seminar. Photo: Dylan Hewlett
The key player is Leonard (Tom McCamus), a formerly successful novelist who has fallen on bad times. He is drunk, high on drugs, rude, crude, offensive, and obnoxious.  Apparently he is also a very god judge of writing.

Four young would-be writers pay Leonard handsome amounts of money to have him comments on their work. They gather in a nine-room apartment in the Upper Eastside of Manhattan and Leonard who is as usual high on something starts tearing into the young hopefuls.

He reads about five words of Kate’s (Andrea Houssin) short story that she has been writing for years and tears it to shreds mercilessly. He does find some positive things to say about a couple of the other writers before axing their hopes  but we can only discuss literary ambitions for so long. We need sex.

Izzy (Grace Lynn Kung) is beautiful, desirable and available. She gives Martin (Nathan Howe) the best sex he has ever tasted and Leonard partakes as well. Yes, there are moral issues here but let’s just forget them.
Leonard does zero in on the abilities of his students between being insufferably insulting and cruel. The well-connected Douglas (Ryan James Miller) can write a workman-like novel but his best bet is to go to Hollywood. This advice comes after he calls him whorish.

Kate manages to get approval when she pretends that the piece she submits is by a Cuban transvestite. But Leonard does espy a true voice in what she writes. He beds her and helps her get a ghost-writing job. 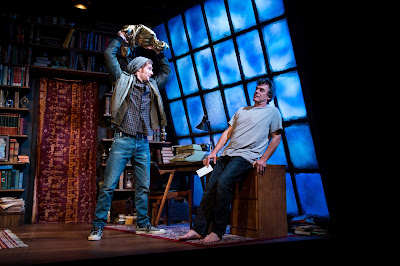 Martin is poor, idealistic and afraid to submit his work to Leonard. Eventually he does and sees the work that Leonard is doing and the play reaches its climactic end.

McCamus could hardly do or be expected to do a less than superb job in the role of Leonard. His lined face, his rumpled hair and clothes, his gravelly voice all combine to give a splendid performance as the obnoxious but tortured and talented writer/editor.

The rest of the cast give impressive performances. Andrea Houssin garners laughs and sympathy as she eats to get fat when she is depressed until she finds a way to get approval and sex from Leonard. Miller’s Douglas is cool, ambitious, uppity and well-connected and must swallow the bitter criticism that Leonard shovels at him.

Kung’s Izzy is a sexual magnet with some writing talent. Howe’s Martin is intense, sensitive and at times childish but he does grow up during the play.

Stewart Arnott’s directing is sensitive and precise. The acting and reacting is finely modulated so that we see the aim of every insult and bit of praise painted on the face of the recipient and the faces of the other actors.

Seminar is a well-crafted play that combines the high ground of literature, the middle ground of ambition, fear and search for a way to literary success and the lower floors of sex, insult and drugs. Just the sort of place you want to visit.