As the whole world knows, Jacob Two-Two is 2+2+2 years old, he has two eyes, two hands, two feet etc. and he says everything twice.

Young People’s Theatre has produced the wonderful musical, Jacob Two-Two Meets the Hooded Fang 2+2+2+2 times to the delight of young and not so young alike. This year is the, well, let’s economize, 2 x 20 anniversary of the publication of Mordecai Richler’s book and I am allowed to say it again this is a wonderful musical based on the novel. 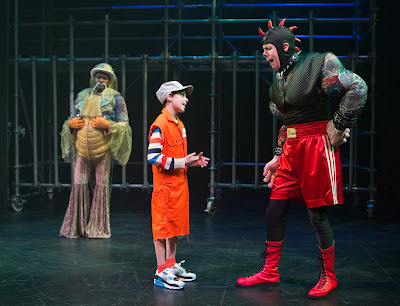 L-R: Matthew G. Brown, David G. Black and Damien Atkins. Photo by Cylla von Tiedemann.
I attended opening night of the current revival with my Associate Reviewer, a highly precocious and perceptive seven-year old (“I’m going to be eight in March!”) to make sure I did not miss any of the nuances of the production.

The play has new music and lyrics by Britta and Anika Johnson that are tuneful and enjoyable. The production is fast-paced and starts with some amusing scenes with Jacob’s family and I get an early review.

Associate Reviewer: This is funny.

Jacob is sent to the grocery store to buy some tomatoes and he is arrested for offending an adult. He is represented by lawyer Louie Loser (Darrin Baker) in front of Judge Rough (Saccha Dennis) and an even rougher jury. He is found guilty and thrown in prison. The justice system a drubbing with all the bad stereotypes of the incompetent lawyer, the bad judge and the abusive treatment of Jacob but my Associate did not seem to mind. She just found Louie Loser funny. 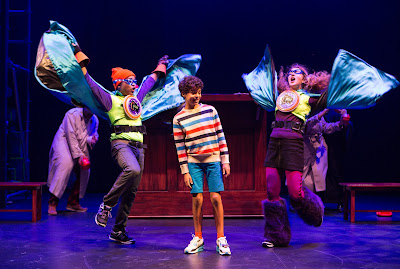 Associate Reviewer: “Is this a real story?”

David Gregory Black is a lively, funny and just superb Jacob. (He alternates in the role with Drew Davis.) The rest of the cast take on a couple of roles or play in the ensemble. It is a fast-moving acting and singing ensemble.