HERETIC – REVIEW OF SARAH THORPE’S TAKE ON JOAN OF ARC

Sarah Thorpe’s retelling of the story of Joan of Arc opens with a woman on her knees being asked to confess. She replies in a steady voice that is neither sanctimonious nor fearful that she has done nothing wrong. The words are spoken at the opening and closing of the play, moments before Joan, age 19, is executed.

Thorpe’s curiosity about the young girl who at age 13 claimed to hear divine voices and became a French military hero has driven her to look for the young woman behind the saint and retell the story of Joan in her own way. 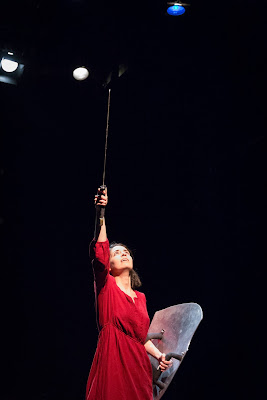 Thorpe is a tall woman who presents a Joan that has courage, persistence, fearlessness and faith. She is neither overly pious nor particularly deferential but gets her way by strength of character.

We are given some historical background and follow Joan’s story from a rebellious 13-year old that is flogged by her father to her confrontations with French clergy and nobility. We hear the story from a modern standpoint and Thorpe/Joan admits that she was not perfect and that she made mistakes.

Thorpe acts some of the parts of the people that Joan encounters with voice changes for some and prerecorded voices for others.

The show is all Sarah Thorpe. She makes good use of the stage; there is some humour and she is able to modulate her voice to marvelous effect. Joan of Arc is probably beyond comprehension but Thorpe’s version is a refreshing change from the usual image we get of the girl and young woman who was executed by the Catholic Church and then made a saint by the same institution.
______