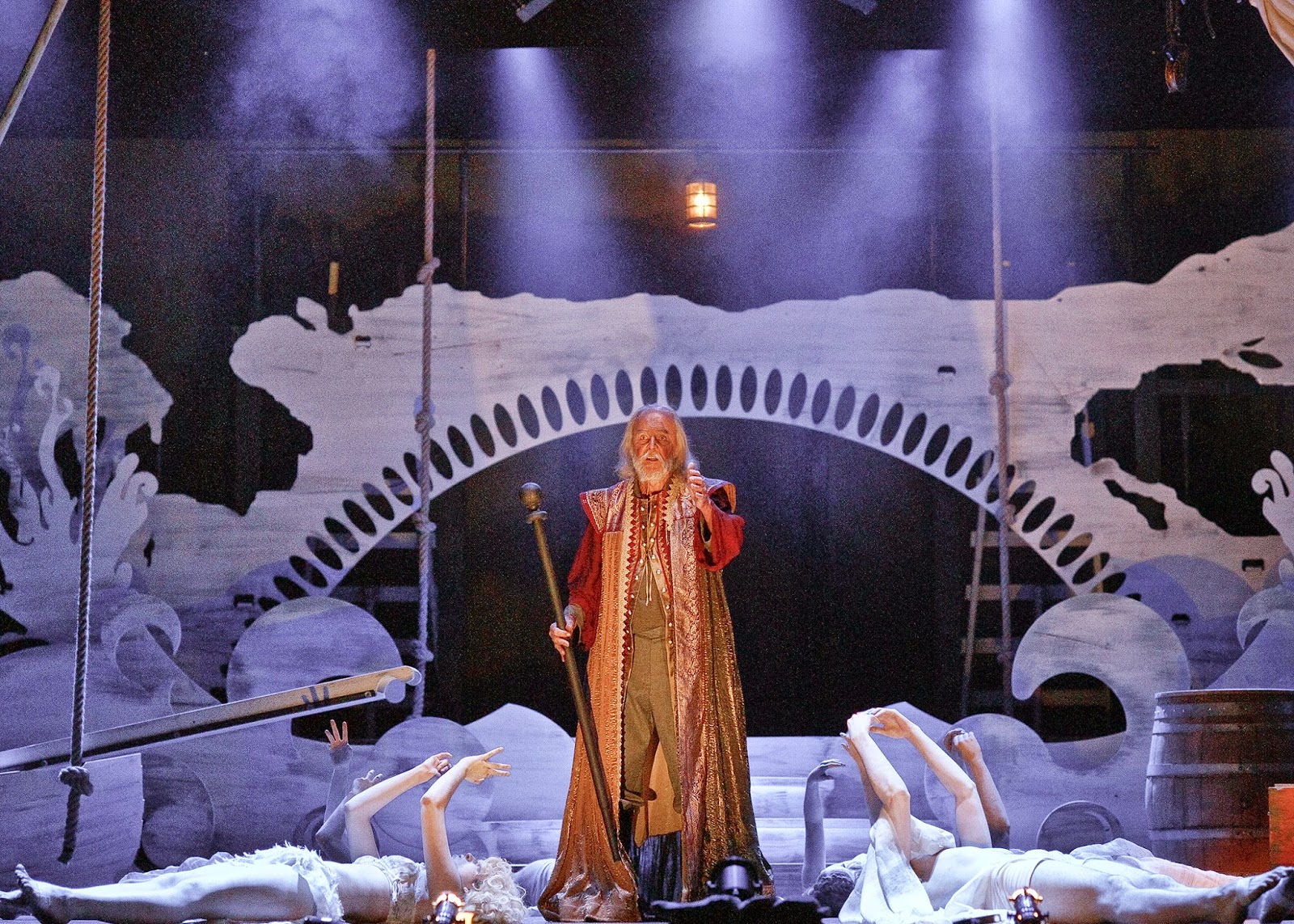 The Tempest is full of magic, music, enchantment and fairies set on a dream-like island ruled by a kindly (and at times tyrannical) Duke with supernatural powers. All productions of Shakespeare’s last complete play attempt to create that atmosphere but few are as successful as the current staging at Hart House Theatre.

Director Jeremy Hutton uses a number of techniques to create the magical world of The Tempest and maintain it from beginning to end.

The production opens with a ship sailing in a calm sea with the sailors singing happily. There are spirits watching them and Prospero appears. He strikes his staff on the ground and then we hear the tempestuous thunder as the ship is battered and sunk by the storm.

The six spirits that Hutton has in this production resemble Ariel and they are present on stage throughout the play. They appear like statues hanging from parts of the set or come to life and dart around the stage. Their movements are carefully choreographed and they serve as a constant reminder that we are in a world of magic and enchantment. In the play, the spirits have a limited role singing a brief refrain in the first act and taking part in the masque.

In addition, Hutton makes use of Prospero’s magical powers by having him strike the ground with his staff frequently to excellent effect. When Prospero is telling his daughter Miranda about his usurping brother, he bangs his staff and we see Alonso as if projected on a screen at the back. This happens when the other people in the play are mentioned.

Hutton and Lighting Designer Joseph Patrick make judicious use of strobe lights and other uses of lighting to emphasize the other-worldliness of the island. The overall effect of these techniques is to create the marvelous world of the island that is so essential to any production. An amazing feat.

Peter Higginson makes a decent, kindly Prospero who seems to enjoy his supernatural powers. The exiled Duke of Milan has another, much less benign side in his treatment of the “natives” but Hutton prefers to deemphasize that part of Prospero’s character. 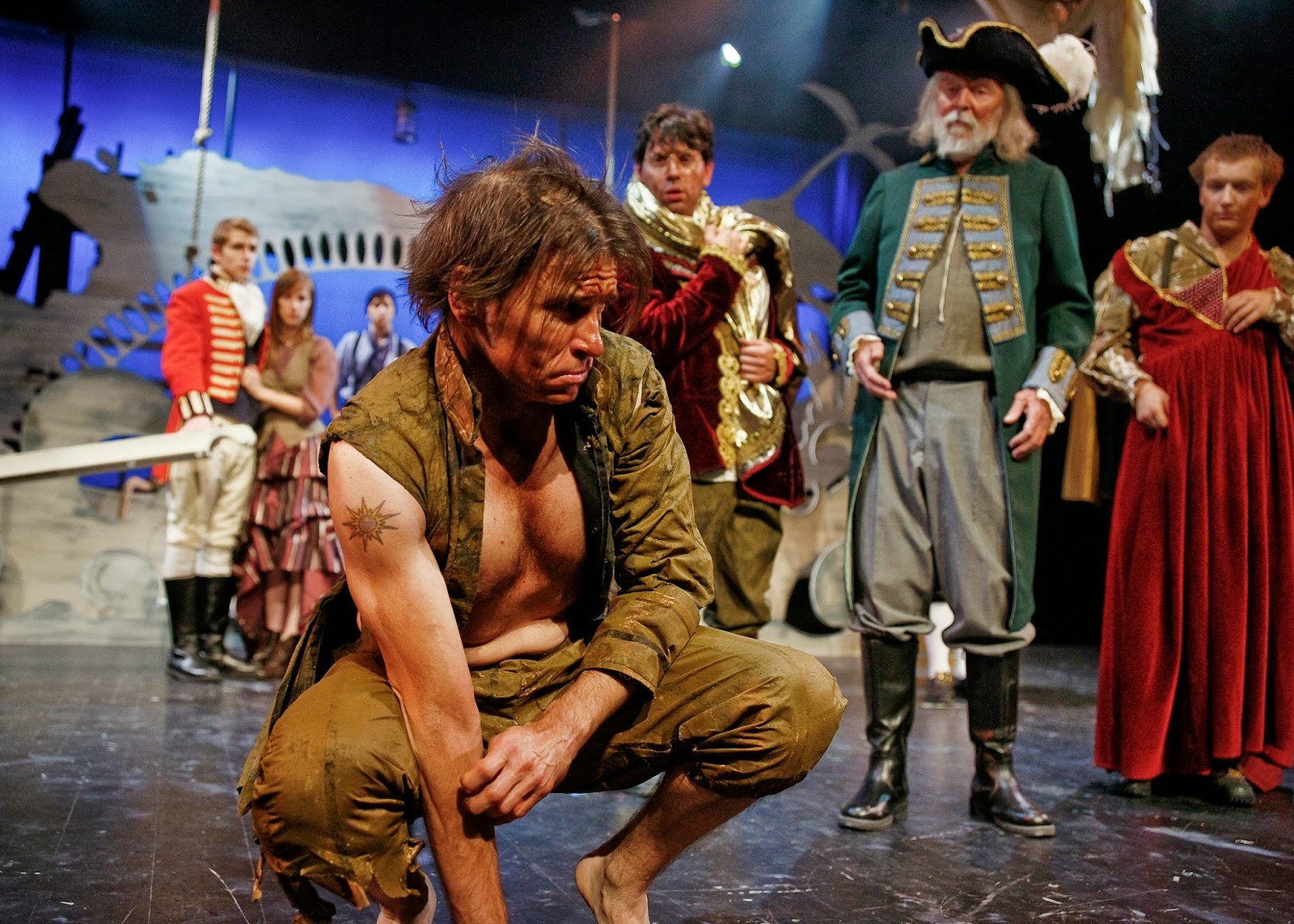 William Foley’s Caliban is not deformed at all but he is able to scream, roll on the stage and produce laughter. He also gives a sound indication of the possible injustice meted on him by the uninvited Duke. Caliban tries to violate Miranda and his punishment is enslavement following the conquest of his island by Prospero. On the comic side Foley, Paolo Santalucia as Stephnao and Cameron Laurie as Trinculo give hilarious performances.

Katherine Fogler is lovely and fetching as Miranda and Andrei Preda is an upstanding and handsome Ferdinand. They are just what lovers should be.

Of the lesser characters, Michael McLeister stands out as the decent if somewhat garrulous Gonzalo.

Some words were muffed, some lines were muffled but overall the delivery of the lines was very decent.

The single set was very effective. The white-washed boards of the ship in the opening scene became the door to Prospero’s cave and there was room for the spirits to dangle around the stage. The costumes were naval for most of the men.

Choreographer Ashleigh Powell deserves kudos for the movements that she created for the spirits and for the handing of the masque.

Without taking anything away from the actors, the most impressive aspect of the production was the magical island that Hutton and his team were able to create.
______

The Tempest by William Shakespeare opened on November 5 and will run until November 22, 2014 at the Hart House Theatre, 7 Hart House Circle, Toronto, Ontario. M5S 3H3  www.harthousetheatre.ca
Posted by James Karas at 4:51 PM