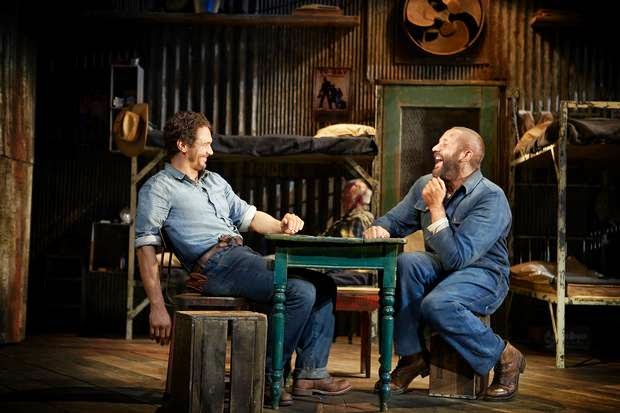 John Steinbeck’s 1937 novella, Of Mice and Men, is a story about loneliness, abiding hope, enduring aspiration for security and above all friendship. The story of the friendship between the quick-witted George and the simpleton Lennie has a mythical quality to it that reaches back to Damon and Pythias, and Achilles and Patroclus.
The defining words on friendship for the modern world perhaps belong to E. M. Forster: “If I had to choose between betraying my country and betraying my friend, I hope I should have the guts to betray my country.”

Steinbeck’s dramatization of his book received an outstanding production from England’s National Theatre and a performance at New York’s Longacre Theatre was broadcast in movie theatres.

George (James Franco) and Lennie (Chris O’Dowd) are itinerant ranch workers in depression-era California. George is intelligent and a friend of the simple-minded Lennie. They are very different people but are joined in their dream for a piece of property where they can live off the fat of the land, as they say.

In the movie theatre, one has the advantage of looking into George’s intelligent, sharp eyes and tough demeanor. As for Lennie, his eyes express his simplicity, kindness and love of soft things. We also see his roughness as he pats mice and puppies to death. Eventually he will panic and break Curley’s Wife’s neck. Leighton Meester is excellent as the flirty, fragile, dreamy and lonely woman who wants to escape from the ranch.

The production’s success is based on the outstanding interplay between George and Lennie.  Lennie annoys and exasperates George but makes him laugh too. George knows that Lennie cannot survive without him but he dreams along with him of a better life.

There is only praise for the motley workers at the ranch.  Crooks (Ron Cephas Jones) is immensely moving as the black outcast who is left with nothing but still harbours a dream.

Leighton Meester is excellent as the flirty, fragile, dreamy and lonely wife of Curley. She is a pathetic woman who wants to escape.

Jim Norton is superb as the pathetic Candy. Old and crippled, he has a blind and stinking dog as his companion which is eventually killed. He too wants to join George and Lennie in their quest for a piece of land.

Anna D. Shapiro directs a masterly production from the happy daydreams of the opening act to the final tragedy. The close-ups in the movie theatre are a great advantage but there are drawbacks. The puppy that Lennie squeezes to death is obviously a puppet. In the theatre, we would not be able to notice it. But the details of the facial expressions, the dazed, dreamy look in Lennie’s eyes; the meanness in Curley’s look; the facial expressions in Curley’s Wife’s face are all extraordinary bonuses in an extraordinary production.

I have one compliant. In the final dramatic scene, when George is describing their dreamy future and asks Lennie to “see” their piece of land in front of him, he (George) steps back but stands on Lennie’s side. The scene would be more effective if he stood behind Lennie. I felt as if Lenie could see what George was about to do to him in his peripheral vision.

George and Lennie may well have been betrayed by their country and George may have betrayed his country’s  justice system but in the end he acted like a true friend.
________

Of Mice and Men by John Steinbeck was shown on November 24, 2014 at the Coliseum Scarborough Cinemas, Scarborough Town Centre, 300 Borough Drive, Scarborough, ON, M1P 4P5, (416) 290-5217 and other theatres across Canada.  For more information: www.cineplex.com/events
Posted by James Karas at 1:02 AM