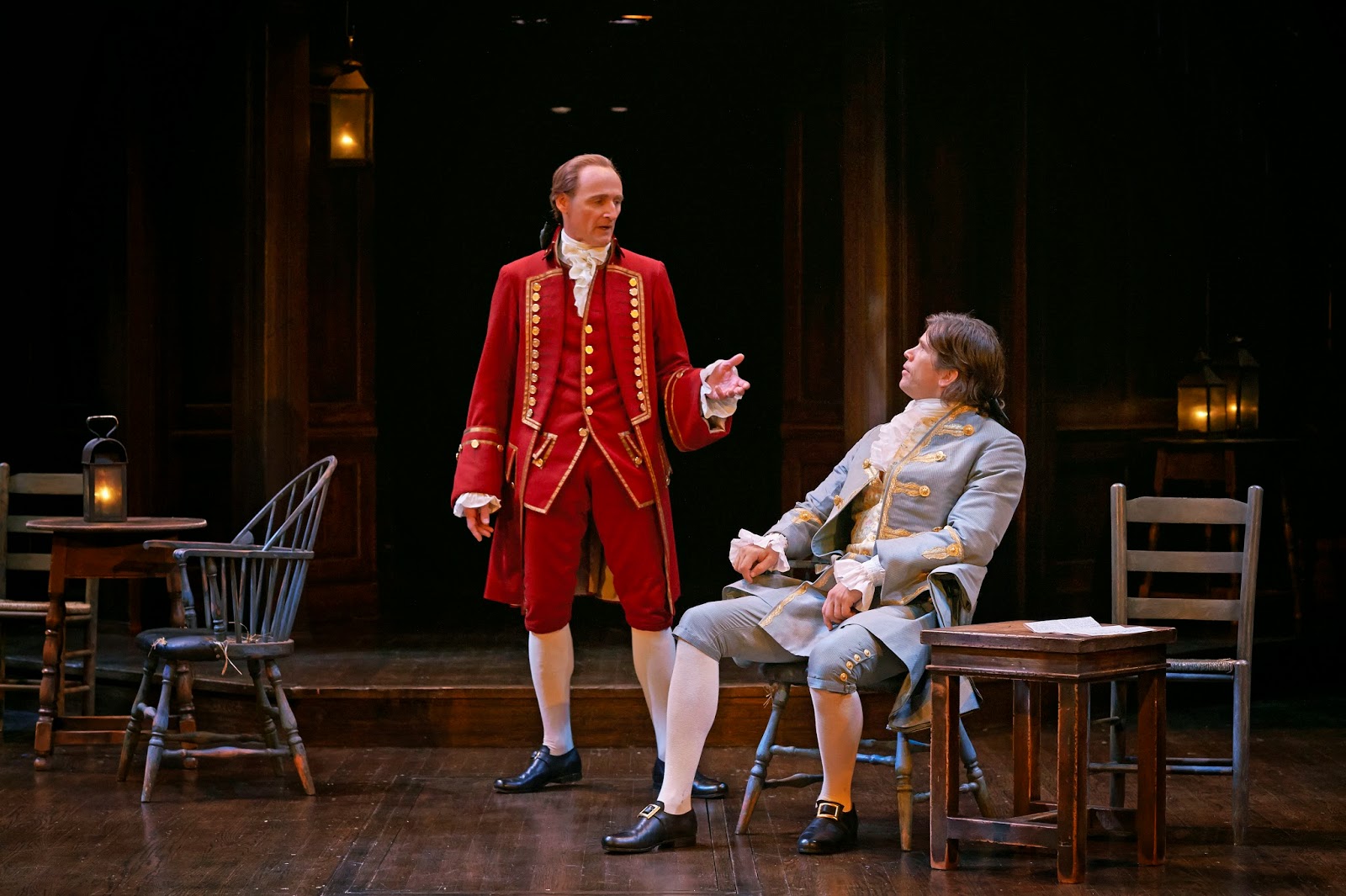 Colm Feore (left) as Archer and Mike Shara as Aimwell in The Beaux' Stratagem. Photo by Michael Cooper

Antoni Cimolino has selected some of the Stratford Festival’s finest actors for his production of The Beaux’ Stratagem, George Farquhar’s 1707 comedy. The result is a highly successful production of a play that is not produced very frequently.

The Beaux’s Stratagem is a literate and fast-moving comedy with some nineteen characters who take us through a number of plot strands leading to a happy conclusion.

Aimwell (Mike Shara) and Archer (Colm Feore) are socially gentlemen but financially impecunious. The solution: find a wealthy heiress in some small town and marry her or join the army. They stop in Litchfield pretending to be a nobleman and his servant and a series of events unfolds to keep the audience splendidly entertained.

They meet the unhappily married Mrs. Sullen (Lucy Peacock) and her drunkard husband Squire Sullen (Scott Wentworth). Archer lays amorous siege on Mrs. Sullen but she resists him even though she is highly tempted by his efforts. Aimwell pursues the lovely Dorinda (Bethany Jillard) with fervour and is more successful because she is not married.

Martha Henry appears as Lady Bountiful, a rich widow given to herbal medicine and the mother of Squire Sullen and Dorinda. She has saved more people than doctors have killed, we are told.

We have a French Count (Evan Buliung), an Irish priest posing as a Frenchman (Michael Spencer-Davis), a highway man named Gibbet (Victor Ertmanis), and Boniface (Robert King), the amusing inn owner. There are servants and travelers to fill the stage and carry us through the numerous turns in the plot. 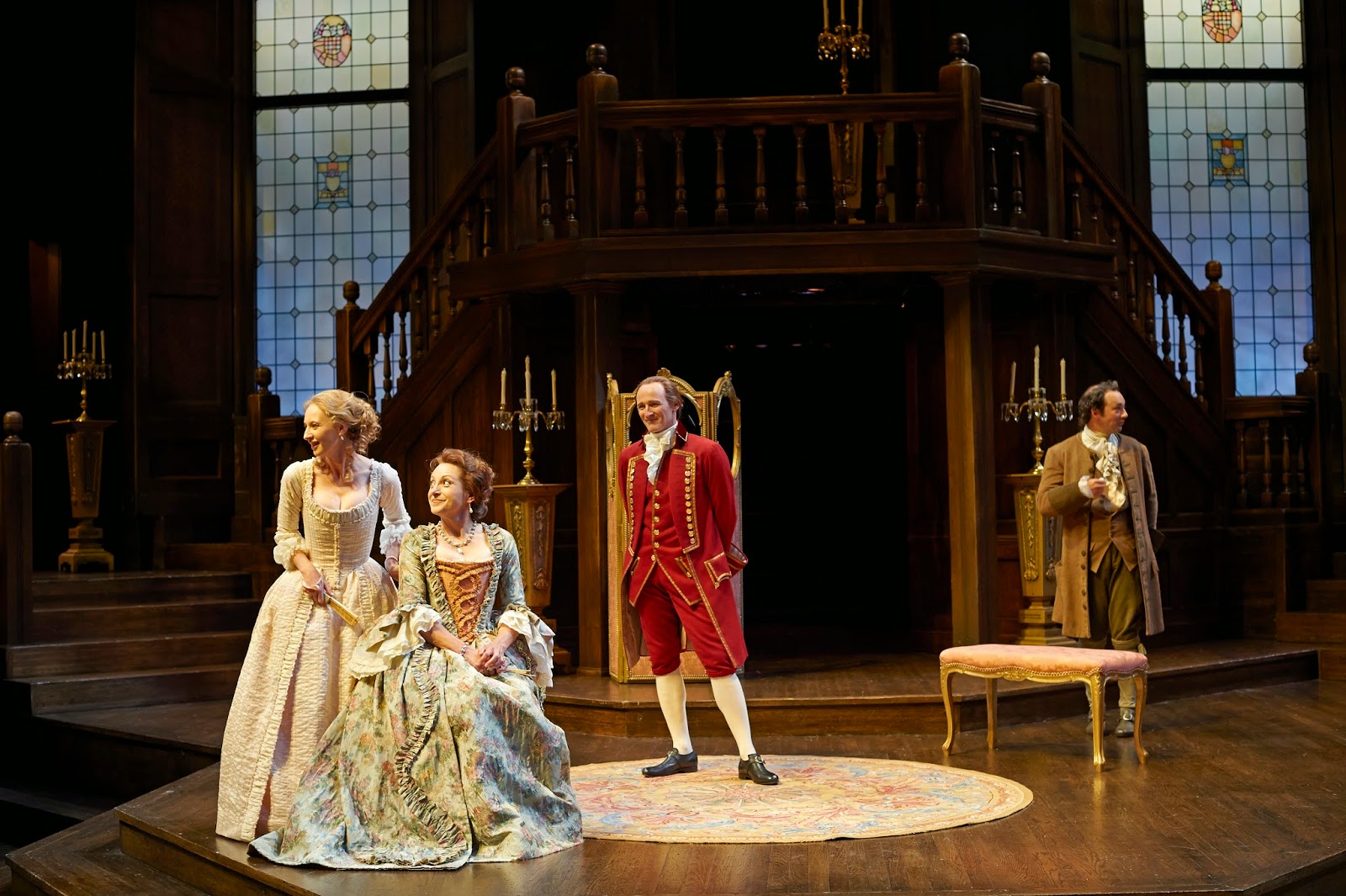 The result is highly enjoyable. Shara and Feore are excellent as the swaggering beaux. Wentworth has the juicy role of the cynical husband who hates his wife, loves her money and adores drinking. Peacock does an excellent job as a wife seeking escape from a bad marriage and provides cogent commentary on the non-existence of divorce laws.

King as Boniface gets the laughs as does his wily daughter Cherry played well by Sara Farb. Spencer-Davis is very funny as Folgard the priest.

Cimolino had his work cut out in keeping the large cast moving through some complicated plot twists and getting out the funny and literate aspects of the play. He wisely chose not to even attempt to have the cast struggle with English accents. It would have been very annoying to listen to a good part of the cast torturing the text with their attempts at an accent.

Restoration and Eighteenth Century comedies are not exactly Stratford Festival staples and one is quite happy with a delicious taste of one of them.
______

The Beaux’ Stratagem by George Farquhar continues in repertory until October 11, 2014 at the Festival Theatre, Stratford, Ontario. www.stratfordfestival.ca
Posted by James Karas at 6:48 PM