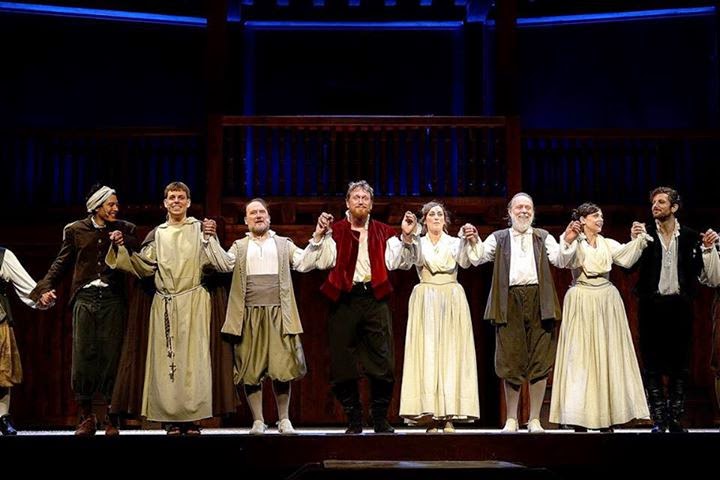 When in Rome, you should, to coin a phrase, do as the Romans do. In the summer you should go to the Globe Theatre and watch productions of plays by William Shakespeare.

No, I am not mixing up my cities. Rome has a replica of the Elizabethan Globe Theatre where for the eleventh year in a row there is a summer season of plays by Shakespeare and other playwrights.

I caught a fine production of Much Ado About Nothing or Molto rumore per nulla directed by Loredana Scaramella.

Scaramella captures the comedy, both high and low, and gives a very lively accounting of the play. Mauro Santopietro and Barbara Moselli make an energetic Benedick and Beatrice. Fausto Cabra as Claudio looks and acts like a dunce and, of course, he is. Claudio does come through in the end because we need a wedding and a happy ending.

Leonato (Daniele Faccioti) is gracious as the Governor of Messina and passionately furious as the father of Hero (Mimosa Campironi), the bride-to-be of Claudio who is accused of conduct unbecoming the night before her wedding.

The show was stolen by Carlo Ragone who played the inimitable Dogberry and made something significant of Balthasar. As Dogberry he is dressed vilely and has hair that looks like an oil slick. He has one leg shorter than the other and hops around the stage as he gives his orders. Hilarious.

As Balthasar he sings and directs a three-man band and elicits laughter while doing justice to the songs including a few falsetto shrieks. Quite a performance by an actor who seems to have comedy in his bones.

The rest of the cast did fine work but a few comments about the directing are a propos.

For some reason Scaramella has decided that the cast need microphones strapped around their heads. That meant we heard all the characters through the loud speaker closest to us. In a small theatre this seemed unnecessary and at the beginning of the performance, annoying. You get used to it after a while.
The action took place all too often in the front of the stage as if the sides did not exist. This is surely an oversight. The Globe is an oval-shaped theatre and the people sitting on the sides should not be ignored.

The most distinct aspect of Fabiana Di Marco’s set design was the use of sheets on clothes lines. They seemed pointless at the beginning but they came in handy as poor but comic covers for Benedick and Beatrice when they were being fooled into believing that they were madly in love.

There is considerable room for physical humour in the play and Scaramella provided some but I felt that there was room for more and the sheets were not enough.

The Silvano Toti Globe Theatre was built in less than four months in 2003 in the Villa Borghese and holds 1250 people of whom 420 sit on the floor. These are the yardlings of Shakespeare’s Globe but unlike them who must stand throughout the performance, the Romans are seated on the ground. In London, the actors frequently play down to the yardlings to great effect. In Rome in the production that I saw, they were largely ignored.

The current season runs from July to September and is dedicated entirely to Shakespeare. Love’s Labour’s Lost runs from September 11 to 18 and there is a Shakespeare Fest on September 19, 20 and 21, 2014 to end the season.  In Rome, if you please.
______

Much Ado About Nothing (Molto rumore per nulla) by William Shakespeare ran from August 22 to September 7, 2014 at the Silvano Toti Globe Theatre, Villa Borghese, Rome. www.globetheatreroma.com
Posted by James Karas at 4:52 PM