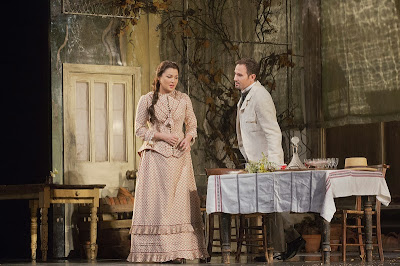 Anna Netrebko as Tatiana and Mariusz Kwiecien as the title character of Tchaikovsky's "Eugene Onegin."
Photo: Ken Howard/Metropolitan Opera. Taken on September 16, 2013 at the Metropolitan Opera in New York City.


The Metropolitan Opera launched its eighth season of Live in HD broadcasts around the world with Tchaikovsky’s Eugene Onegin. This is a new production by Deborah Warner and it has, as they say, an all-star cast. You can hardly expect anything less for the opening production of the new season at the Met.


It is a well-sung staging with some extraordinarily drab sets. It struck me as more Chekhov and Gorky than Pushkin and Shilovsky in its insistence on an almost dingy and depressing country house background where these well-dressed people with very little to do apparently are headed towards inevitable tragedy.


Top kudos goes to soprano Anna Netrebko as Tatiana, the romantic teenager who falls in love with the cad Onegin. Netrebko’s Tatiana is beautiful, a touch on the plump side perhaps, but still agile physically and simply marvelous vocally. She displays all her talents in the Letter Scene alone where she goes though the gamut of emotions from distress, to uncertainty to delicious happiness and finally collapses on the floor very dramatically. This Tatiana may be an irredeemably romantic girl but she also shows strength and we simply fall in love with her.


Eugene Onegin is the handsome, brooding loner who does not want to commit himself to love and marriage. Baritone Mariusz Kwiecien has a supple baritone voice, a handsome face and a reasonable facsimile of the manners of a cad (not entirely convincing). He is easily bored and takes revenge on his friend Lenski for inviting him to a boring party by flirting with his (Lenski’s) fiancée Olga (Oksana Volkova).


Tenor Piotr Beczala sings the tragic poet Lenski and he gets some of the best arias in the opera. He gets a gorgeous love aria in Act I and sings his masterful Farewell to life in Act II when he is about to duel with his friend Onegin. Beczala breezes though his arias with splendid control and effectiveness. Lenski is sometimes presented as a portly and bespectacled poet. Beczala is handsome and debonair but in this production they put a pair of glasses on his nose to fit his character better. A splendid performance.


This production was staged originally by Deborah Warner for the English National Opera. She was not available to direct the Met’s production and Fiona Shaw was brought in to do the job at the Met. It is a well-thought out and directed production with numerous intelligent touches but, as I will complain about later, some awful sets.


When the Russian peasants sing their zesty chorus in the first scene, we are treated to a ballet sequence. When Onegin appears at the ball in Prince Gremin’s house in St. Petersburg, brooding, bored, dejected, Warner takes us a step further. Onegin is snubbed by the guests as he tries to make some contact with them. It is a marvelous scene of the cad getting his comeuppance. This is probably more effective in the movie theatre where we get close-ups of the guests at the ball turning away from Onegin.


What are Warner and Set Designer Tom Pye trying to convey with the set designs? The scenes at the Larin Estate in the country take place in a non-descript large room. It must be somewhere at the back of the house, I suppose, because the peasants enter through there and there are vegetables, flowerpots and various chairs and tables. The windows are dirty and the atmosphere is, as I said, drab.


The Letter Scene takes place in the same room instead of Tatiana’s bedroom.


The ball at the Larin Estate is equally depressing. The ballroom is large with a bad paint job, nothing on the walls and a chandelier not suitable to light up a chicken coop. Is this another Chekhovian image of a civilization nearing its end?


We expect to see beauty and opulence at Prince Gremin’s house but we are disappointed again. The Prince’s idea of decoration consists of rows of Greco-Roman columns that look imposing without being impressive and massive without being beautiful. The Prince has money but no taste.


Eugene Onegin by Peter Ilyich Tchaikovsky (libretto by the composer and K. S. Shilovsky after Pushkin) was shown Live in HD on October 5, 2013 at the Coliseum Scarborough Cinemas, Scarborough Town Centre, 300 Borough Drive, Scarborough, ON, M1P 4P5, (416) 290-5217 and other theatres across Canada. Encores on November 16 and 18, 2013. For more information: www.cineplex.com/events
Posted by James Karas at 11:48 PM