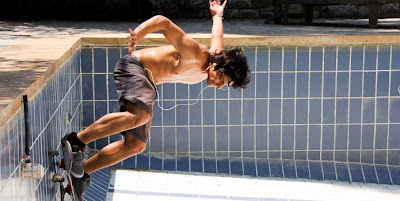 
Wasted Youth is a 2011 film directed by Argyris Papadimitropoulos (from Greece) and Jan Vogel (from Ecuador). It had its Toronto premiere at the Toronto International Film Festival in  September 2013.
The title is slightly misleading. Papadimitropoulos and Vogel don not so much present a portrait of wasted youth as a depiction of wasted society. The film has two plots. One involves Harry (Harris Markou), a 16-year old skateboarder who is involved in some irresponsible, youthful hijinks and some pretty idiotic and despicable behavior with his friends.


The other plot involves Vasilis (Ieronymos Kaletsanos), who is trapped in a life of quiet desperation. In his first appearance in the film, he attempts sexual intercourse with his wife and fails to achieve anything.  A friend tries to convince him to go into business but he refuses. Life at home is a misery. He is a police officer who is getting night shifts because of the corruption of the officer who assigns the day shifts to someone from his hometown.
Kaletsanos maintains a look of almost clinical depression as he goes through his daily routine at home and at work. The two plot lines develop separately until near the end of the film when Vasilis runs into Harry and his friends. 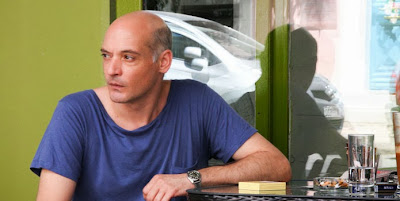 Harry skateboards incessantly, refuses to find work, gets drunk, masturbates in public with his friends and posts obscene stickers on public property. He and his friends crash a wedding and get drunk. At best, this is a disturbing image of Greek youth.

The adults do not present a much better image. We see a group watching horse races in the middle of the day. Harry’s father seems unemployed and does not get along with his son. There is a middle-aged woman who is a friend of Harry’s who lives in a large house but even she seems to be suffering the same financial stress – her swimming pool has no water and there are no indicators of wealthy living.

There is no ray of hope in the depiction of life in Greece. The most positive character is Harry’s attractive girlfriend who does not allow him to have sex with her or to grope her.


The script is by the co-directors and the inspiration was the shooting of a youth by the police in 2008 that set off a series of riots in Athens reminiscent of the aftermath of the Rodney King shooting in Los Angeles.
The two plot lines are told in a straightforward fashion but the directors have a predilection for camera angles and shots that did not make sense or enhance the story, I thought. As a depiction of the malaise of youth and the torpor of Greek society, the film is right on target.
Posted by James Karas at 12:54 PM