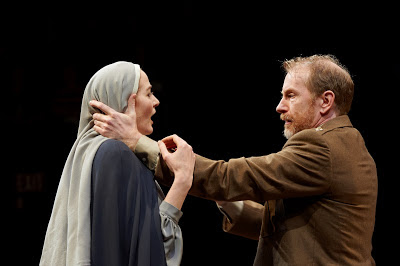 Carmen Grant as Isabella and Tom Rooney as Angelo in Measure for Measure. Photo by Michael Cooper.


Measure for Measure is the second play by Shakespeare offered by the Stratford Festival this year. It is directed by Martha Henry at the Tom Patterson Theatre. The production has many virtues but it also many points for disagreement  which do not necessarily qualify for the ascription of vices.


Henry sets the play in Vienna in 1949, as good year as any place, I suppose, for a society to give itself over to rampant immorality and vice. Henry displays a good grasp of the possibilities of the play and treats it with imagination and creativity. Most of her ideas work.


When the lights go on a robust woman with too much makeup and a hideous blonde wig walks on stage. She takes off the wig and her dress to reveal that it is the Duke Vincentio (Geraint Wyn Davies) in drag. This explains quite deftly how the virtuous and softhearted duke has learned that his city has become licentious and that his laws are simply not enforced. Excellent opening.


The Duke appoints the virtuous and upstanding Lord Angelo (Tom Rooney) as his temporary replacement. Angelo shows up in military uniform with his jacket off and his hair disheveled. Hmmm.


The upshot of the plot is that Isabella (Carmen Grant), a novice, will come to Angelo to beg for her brother Claudio’s (Christopher Prentice) life. He has been condemned to death for getting Juliet (Ruby Joy) pregnant without being married to her.


Angelo develops an overwhelming lust for Isabella and he proposes to free her brother if she has sex with him. Lust is no respecter of anything but for Angelo to desire Isabella so fiercely there must be something in her to make her irresistible. She must have some sexual magnetism that Grant simply does not project. This is no doubt a tall order because Isabella has chosen monastic life but I still hold that there has to be a certain latent sexuality in her to make Angelo renounce all sense of morality. Otherwise, Isabella is fine as a thin-lipped upholder of her morals even if it means her brother’s death.


Grant has a mannered way of speaking which includes nodding her head a shade too much and grimacing a tad more than necessary. A future nun should speak with a virtuously straight or at best sanctimonious expression.


Davies is quite straightforward as the Duke as is Peter Hutt as Escalus. They are both men who hold high office but the Duke gets a lot more fun by disguising himself as a monk and watching immorality in action.


From left: Christopher Prentice as Claudio, Stephen Ouimette as Lucio and Ruby Joy (background) as Juliet with members of the company in Measure for Measure. Photo by Michael Cooper.
In tandem with the Duke-Angelo-Isabella plot is the story of the low-lives of Vienna. They are the pimps, prostitutes and officer Elbow who are far more entertaining than the ruling class. Stephen Ouimette makes a marvelously slimy Lucio. He is a liar, a fantasizer and a delicious scoundrel. He is in good company with Mistress Overdone (done splendidly by Patricia Collins) whose character is summarized by her name and Pompey (a superb Randy Hughson) whose specialty is getting beaten up.


Constable Elbow, played to perfection by Brian Tree, is a strutting and completely ineffectual martinet who produces laughter with every over-done salute.


What Isabella lacks, Mariana (Sarah Afful) has in abundance. She exudes sexuality and is dressed for it. She was betrothed to Angelo but he dumped her because her dowry fell through. If Angelo is a man of lust, Mariana is the woman to satisfy his desires. It may be that he is attracted to Isabella’s forbidding virtue rather than her sexual appeal.


Another example of Henry’s directorial talent is her treatment of the secondary role of the Provost (Stephen Russell). Henry finds a brilliant way of humanizing the straight-backed, stiff Provost shortly after he comes on stage. He notices that one of the shoelaces of the pregnant Juliet is undone and he bends down and ties it. The functionary becomes a mensch.


A few words about Stephen Russell. He is in his 31st season at Stratford and at one time played leading roles such as Richard II and Julius Caesar and did them well. That was a long time ago and recently he has been demoted to practically walk-on roles. The part of the Provost and the upcoming Duke of Venice in Othello are better roles than he has been getting for some time. The question is why is he given such minor and frequently crappy roles?


The Duke’s last words to the Provost in Measure for Measure are equally applicable to Russell: “Thanks, Provost” says the Duke. “We shall employ thee in a worthier place.”


Measure for Measure by William Shakespeare opened on May 29 and will continue in repertory until September 21, 2013 at the Tom Patterson Theatre, Stratford, Ontario. www.stratfordfestival.ca
Posted by James Karas at 2:46 PM