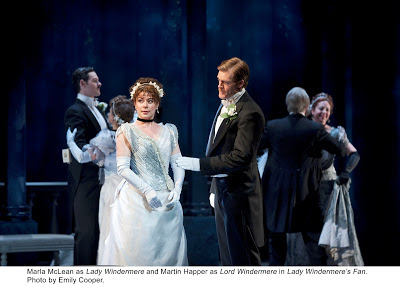 
Lady Windermere’s Fan may not be Oscar Wilde’s best play but there is no shortage of wit, epigrams and balanced sentences. Its milieu is the upper-class world of nineteenth century London where Lords, Duchesses, Dukes, Ladies and Sirs abound and lesser mortals exist usually only as servants. This world has a way of acting, speaking and carrying themselves that is quite removed from the world of hoi polloi.


The current production at the Festival Theatre, directed by Peter Hinton and designed by Teresa Przybylski tries very hard to create a style of its own for the play. The costumes are beautiful, the sets elegant but unrealistic and the mode of expression deliberate. The result is a production that at one time or another can be described as slow, flat, pretentious and dragging.


After a display of beautiful gowns and fans, the curtain goes up like a box opening the left side of the stage. Hinton uses only the right half of the stage for the first part of the opening act. He does not want to rush us into the action therefore when the arrival of Lord Darlington (Gray Powell) is announced, Lady Windermere keeps busy for some time until he arrives from some distance away. Hinton wants Darlington to walk from the front door in real time.


This sets the pace for a slow, very slow, evening. I felt as if the stage were a vat of molasses into which the actors had to struggle to get any kind of speed in speech, movement or wit. Most of the lines fell flat and all one could think about was to scream “pick up the pace.”


The inability of Canadian actors to speak in any kind of aristocratic English accent is a matter of record and regret. They all try, of course. There is a way of delivering Wilde’s lines that demands a crisp, well-modulated English accent that suits the posh surroundings and expresses hauteur and elegance. You cannot just drop your r’s and hope you will sound like a Lord or a Duchess.


The accents here were within the usual parameters of the almost acceptable to the quite deplorable. 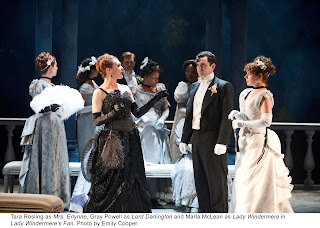 Marla McLean is attractive as Lady Windermere but not convincing. She opens her husband’s bank statement and discovers that he is handing out money hand-over-fist to a Mrs. Erlynne. Well, not surprisingly, she suspects him of infidelity.


When the Windermeres hold a ball, Mrs. Erlynne is invited. We expect her to be a beautiful woman, classy, magnetic, even gorgeous perhaps. Let your imagination and vocabulary wander but this lady has to be out of the ordinary. Tara Rosling does not quite qualify for such ascription. There is a surprise in store about the real identity of Mrs. Erlynne but I still hold that she must have attributes that would make a man run afoul of marital fidelity. Rosling fails to convince us that she is a woman with a past and a secret.


Martin Happer is an attractive Lord Windermere and has more of an aristocratic bearing than a lot of the others in the cast. He has a decent English accent but that only makes him an acceptable Lord Windermere.


The rest of the titled ladies and gentlemen and the not so noblessly-obliged suffer from the same malady – they were in a society and a world in which they could not convince us that they belonged. A disappointment.
______