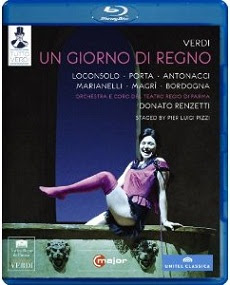 Giuseppe Verdi’s second opera and his first foray into comedy was Un Giorno di Regno which premiered at La Scala, Milan in 1840. It was a disaster. Verdi would not touch comic opera for more than fifty years and the world would ignore Un Giorno for well over a century.


We can hardly argue with Verdi for his choices but there is considerable room for mounting a defense of the work as a quite enjoyable evening at the opera. The recording under review on Blu-ray of a performance in Parma in 2010 will be placed as Exhibit 1 in defense of the much neglected and maligned work.


The plot? The king for a day of the title is Cavalier di Belfiore (Guido Loconsolo), a French officer who impersonates Stanislas, the King of Poland. Stanislas is making a surprise visit to Poland to regain his crown but we really do not care about him.


We are in the castle of Baron di Kelbar (Andrea Porta) where two weddings are planned. As you may have guessed, the couples are not exactly matched. The Baron’s lovely daughter Giulietta (Alessandra Marianelli) is to marry the old Signor La Rocca (Paolo Bordogna) and the Marchesa (Anna Caterina Antonacci) who is in love with Belfiore, is to marry Count Ivrea (Ricardo Mirabelli). We have two hours to enjoy the opera and untangle the mess.


Baritone Loconsolo should be the king of the performance and he does reasonably well. He does not have phenomenal range but he handled the role with considerable assurance.


Soprano Anna Caterina Antonacci dominates the performance from her opening cavatina to “Si mostri a chi l’adora,” a beautiful aria, full of longing gorgeously done. I am not too keen on some of her grimaces but her vocal delivery is outstanding.


Tenor Magri is the perfect young lover with his light tenor voice easily reaching the high notes. Nice tone and, except for his hairdo, a delight to hear and see.


Soprano Marianelli is the ideal Giulietta with a sweet and silky voice and innocent looks.


Baritone Paolo Bordogna looked too young to be the old La Rocca and although he was vocally fine he did not do much for the comedy expected of him.


The rest of the singing was at least adequate and in a rollicking comic opera not much more need be expected.


Pizzi directed and designed the set and costumes. The set with pillars, a double staircase and other large objects suggests a castle or something grand, whatever that may be.  The costumes have some weird colours and I suppose the idea is to create a comic world rather than any realistic representation of an 18th century chateau.

The lighting is not always successful and there are times when Video Director Tiziano Mancini shows us faces in the dark.


Verdi provided some rousing choruses, beautiful arias and ensemble pieces and if the comedy is not always successful, the opera and this production are quite enjoyable despite some shortcomings.


This is No. 2 in the Tutto Verdi project undertaken by C Major that has recorded all of the operas in Parma.


The world may be still ignoring Un Giorno but that cannot be said of the Glimmerglass Festival. This year it is producing a new English adaptation of the operas entitled King for a Day.
Posted by James Karas at 11:01 PM

Email ThisBlogThis!Share to TwitterShare to FacebookShare to Pinterest
Labels: OPERA ON VIDEO REVIEW