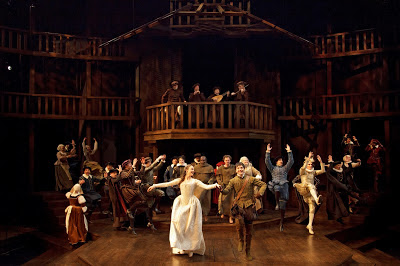 Sara Topham (left) as Juliet and Daniel Briere as Romeo with members of the company in Romeo and Juliet. Photo by David Hou.


With bagpipes piping, drummers drumming, limousines disgorging beautiful people and hoi polloi emitting gasps of admiration (okay, there were bagpipes and taxis), the Stratford Festival opened this year’s season with an excellent production of Romeo and Juliet.


Much of the credit goes to Director Tim Carroll who has brought the “original practices” approach pioneered at Shakespeare’s Globe Theatre in London to the Stratford Festival. Without getting into much detail, the productions are an imaginative leap into how plays may have been done in the 16th century. They are done on an empty stage, emphasize the text and are usually boisterous and thoroughly enjoyable. There is no attempt at “authenticity” because Juliet would have to be played by a boy, just to give one example.


Carroll does not hesitate to add dance sequences, one of which is particularly appropriate and effective. When Paris (Antoine Yared) arrives at the Capulet house on his wedding day to marry Juliet, he and his companions kick their heels into a lively dance. He quickly realizes that Juliet is “dead” and the gaiety stops abruptly as her father (Scott Wentworth) bursts in tears.
The acting, as can be expected in a play with a large cast, is uneven with the good outweighing the merely serviceable. The best is Sara Topham as Juliet. She is young, petite, agile and can leap onto her bed like the teenager that she is supposed to be. Better still, she exudes innocence and youthful passion. Best of all, she has poetry in her voice. Topham understands and delivers Shakespeare’s gorgeous language with nice vocal inflections and modulations. A delight.


The prose is assigned to the lower classes and the best of them is Kate Hennig as the rough-and-ready Nurse. Hennig’s Nurse is the quintessential servant: loyal, cunning, smart and tough. She has no poetry but she is real and splendid.


Stratford veteran Wentworth can always be relied to provide a strong performance, in this case as the patriarchal Capulet. He is both dictatorial and emotionally moving.


Shakespeare gave Mercutio the great Queen Mab speech and Jonathan Goad delivers it fairly straight-forwardly. There are many ways of doing it but Carroll seems to have chosen poetry over histrionics and so much the better.


Tom McCamus gave a first-rate performance as Friar Laurence. This friar is world-wise without being world-weary and holy without being sanctimonious. Terrific.


Daniel Briere made a good-looking Romeo with youth and fervor on his side. Unfortunately he lacked poetry. He has some the most beautiful iambic pentameters ever penned but he managed to deliver only prose. We want to hear the vocal modulation at every syllable and feel that we are listening to verbal music. We did not.


In the final scene, things got even worse but this time it was not entirely Briere’s fault. When Romeo finds Juliet “dead” in the mausoleum, he notices that she is still beautiful and that “death's pale flag is not advanced” upon her lips and cheeks. It is an extraordinarily beautiful speech of love and grief. Briere delivers part of the speech while looking perfunctorily at Juliet and then he jumps on top of the bier on which she is lying. A scene of pathos and majestic grief becomes something from The Three Musketeers. Too bad.


The sum total, however, is a highly enjoyable production and all one can do is repeat Oliver Twist’s plea for “more, please”.


For those interested in trivia, when the Festival opened in 1953, it was called the Stratford Shakespearean Festival. Shakespeare’s name, however, was dropped in 1956. When Antoni Cimolino and Des McAnuff took over as General and Artistic Directors, respectively in 2008 they amended the marquee to read Stratford Shakespeare Festival. Their first production was a lackluster Romeo and Juliet directed by McAnuff.


With Cimolino as Artistic Director this year, we are back to Stratford Festival sans Shakespeare but with a splendid production of Romeo and Juliet. Perhaps we should listen to Juliet when she asks “What's in a name?” and reply “a good production will be just as good no matter what the Festival is called.”


Romeo and Juliet by William Shakespeare opened on May 27 and will run in repertory until October 19, 2013 at the Festival Theatre, Stratford, Ontario.www.stratfordfestival.ca