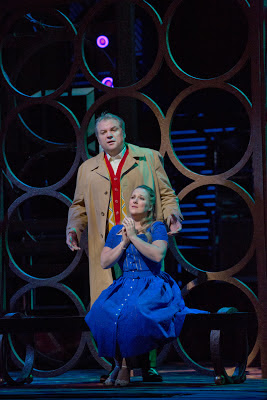 
Can you transpose Rigoletto from the 16th century ducal palace in Mantua to a casino in Las Vegas in 1960?


The short answer is “yes” but the punch line is that the Metropolitan Opera’s new production of Verdi’s chestnut is a brilliant recreation of the opera that manages to be faithful to the original and be stunningly different.


The production is the brainchild of director Michael Mayer with Set designer Christine Jones and Costume Designer Susan Hilferty. They take the action of the licentious palace of the Duke of Mantua to the tawdry, glitzy, corrupt world of the Mafia-run Las Vegas at the time of Frank Sinatra & Co.’s Rat Pack.


The Duke is a singer and owns the casino in a world where morality does not exist even as a word. His hangers-on procure women for him and they have a slightly deformed comedian who provides laughs when they have nothing better to do.


What is amazing is how easily the plot of the opera could be adapted to the Las Vegas milieu. Mayer takes some liberties with the libretto. Words and phrases such as beautiful like a movie star, home run, jackpot, rat pack and other modernisms add to the authenticity of the Las Vegas feel without taking anything away from Verdi.

The familiar setting of a casino makes the opera more human and approachable. Sometimes I  felt as if I were watching a Broadway musical of the most superior kind.


The concept, needless to say, is only the beginning. The cast will do the rest and here Mayer and the Metropolitan have struck a jackpot. Baritone Željko Lučič gives a defining performance as Rigoletto. He has a small hump on his back and, unlike the tuxedoed members of the pack, he wears a sweater. Mayer does not emphasize Rigoletto’s deformity and lets Lučič deliver a joker who is vocally outstanding and, more importantly, a truly dramatic character.  Lučič combines vocal excellence and acting prowess to give us an amazing Rigoletto.


Tenor Piotr Beczala is the perfect devil-may-care casino owner. He wants and gets his way. Beczala’s light tenor voice and his youthful appearance are perfectly suited for the role. He climbs the high notes from “Questa O quella”  to “La donna e mobile” with ease. A pleasure to watch.


Gilda, Rigoletto’s daughter and the victim of the opera is sung by soprano Diana Damrau. Her Gilda is an attractive girl in a plain dress who is a bit overweight and not too swift. This is just the type that you would expect to fall in love with a stranger whom she has seen from a distance. Damrau’s singing is passionate, beautifully modulated and she makes a very good Gilda.


The production, for those of us who saw it in movie theatres, was greatly aided by the judicious handling of camera angles and shots by Matthew Diamond. His work was discreet, intelligent and a pleasure not to notice.


Michele Mariotti conducted the Metropolitan Opera Orchestra in a production that will be long remembered for its inspired eccentricity and its outstanding performances.
____

Rigoletto by Giuseppe Verdi was shown Live in HD on February 16, 2013 at The Beach Cinemas, 1651 Queen Street East, Toronto, ON, M4L 1G5 and other theatres across Canada. For more information: www.cineplex.com/events
Posted by James Karas at 12:50 PM