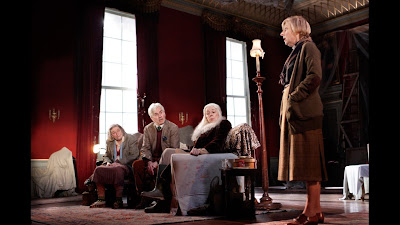 
People, Alan Bennett’s latest play, is a richly textured work, humane, mordant, farcical, wise and simply funny. It is set in a large, stately home that has gone to seed and is about to be sold to the National Trust or private interests. The fate of the house and the old women who occupy it is an obvious parable about England past and present but that is not why the play is so enjoyable.


For my money, the most enjoyable part was watching and listening to Frances de la Tour as Dorothy Stacpoole. De la Tour has a deep, mellifluous voice and she delivers perfectly round vowels in an impeccable, aristocratic English accent that is almost operatic. In the first act, she is dressed in a moth-eaten fur coat with socks and hairdo that make her look frumpy to the nth degree. She resembles the grand house in Yorkshire whose fate is in her hands and has been around for half a millennium but, like her, it has seen better days.


Aside from the two competing interests for the house, Dorothy has to put up with her companion Iris (Linda Bassett), a woman who may not have seen better days. Iris knits most of the time and walks crouched over. She makes a good foil for Dorothy and does get a punch line near the end of the play.


There is additional conflict from Dorothy’s sister June (Selina Cadell), a moralistic, lesbian Archdeacon who wants to sell the house to the National Trust. A fine performance by Cadell.


Add to all that a crew that wants to film a pornographic movie and have the Bishop (Andy de la Tour) walk in at the most inopportune time and you get a hilarious scene from a farce.


The two sides that want to buy the house, the National Trust and private investors are represented by Ralph (Nicholas le Prevost), a garrulous deliverer of twaddle and Bevan (Miles Jupp), a smooth and sleazy salesman, respectively. Very well done.


The main character is the house with the estate on which it was built. It has a long and colourful history from billeting soldiers during the English Civil War to housing Canadian troops during World War II. It was at the centre of a coalmine and it now rests creakily on what remains of the coal underneath it.


Nicholas Hytner directs a funny and moving production that plucks all the right chords.


Designer Bob Crowley gives us a huge and decaying stateroom that is turned back into its glorious past appearance near the end of the play.


The direction for the movie screen is mostly intelligent and well done. There a number of mishaps where the director seems to forget to change camera angles and he is a bit too enamoured of close-ups but not too seriously. The sound is an issue because all the voices come though the same speakers and there is very little perspective. It is the price of seeing it in the movie theatre instead of watching the real thing on London.
Posted by James Karas at 6:55 PM