The Curious Incident of the Dog in the Night-Time is the long title of an amazing play by Simon Stephens based on the novel by Mark Haddon. A performance from London was broadcast to theatres around the world “Live” from the Cottelsoe Theatre which is part of the National Theatre on London’s South Bank.


The Curious Incident is an engrossing play that tries to see the world through the eyes of Christopher, an autistic but brilliant youngster of 15. The play starts with the arresting image of a dog that was killed using a garden fork and the plot develops from there. Christopher, accused of killing the dog, in effect becomes a detective and starts questioning the neighbours in order to find the real killer.


That is pretty dramatic on its own and if we add the elements of a dysfunctional family in the suburbs we would have a bloody good story between the covers of a book or on the stage. But Haddon and Stephens give us much more than that because we see it all through the eyes of the autistic Christopher. He is brilliant in mathematics but he cannot stand to be touched, lacks most social skills and is almost empty of any feeling. He reacts emotionally for the dead dog but he cannot handle most basic functions of everyday life and is bereft of emotional intelligence. 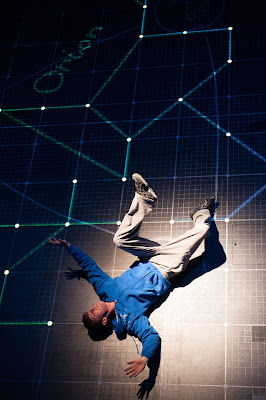 The play is performed on a small rectangular stage and makes use of video projections and the stage floor which can be seen from above and there is extensive use of lights. The play is set in a number of locales from Christopher’s house in Swindon, to his school, to the train station and to the streets of London. The scene changes are done with speed and effectiveness and again all is seen through the troubled eyes of Christopher.


Because much of what Christopher does is in his imagination, there is a character named Siobhan (Niamh Cusack) who acts as a narrator. She is Christopher’s friend and mentor and understands him well enough to describe some of his thoughts and dreams. This is a necessity, no doubt, otherwise we will not get the full effect of what is going on in Christopher’s mind.


Luke Treadaway as Christopher speaks in a slightly staccato and monotonic manner and he gives a simply outstanding performance in the lead role. You understand his genius and see his pathetic character as he can solve complex mathematical equations but cannot find a building that someone points out to him a few hundred feet away.


There is a large number of characters in the play performed by a small number of actors who take on numerous roles. We have a sterling example of ensemble acting and individual talent directed to outstanding effect by Marianne Elliott.


What we saw in the theatre was a performance that was filmed earlier so it was the next best thing to “live” The production started at 7:00 p.m. in Toronto and London theatres are not open past midnight. But that is not a problem.


There were some technical glitches especially in the audio where words were blipped an inordinate number of times. At the beginning I thought they were censoring swear words but that was not true. There were technical problems.


The author of the novel and the adapter attempt the impossible. They want us to see the world through the eyes of a boy in a condition that they can only imagine and guess at. Christopher may display some examples of the conduct of an autistic child but no one can know what the world looks like to an autistic child.


Their guesses and assumptions make for riveting theatre. The emotionally incapable Christopher is given a dog near the end of the play and he is able to pick it up and show some emotion toward it. The play ends with Christopher saying that he can do anything. That may or it may not be true but Haddon and Stephens with director Elliott have provided stimulating, intelligent and  very good theatre, glitches and all.
_____

The Curious Incident of the Dog in the Night-time by Simon Stephens  based on the novel by Mark Haddon was shown at the Scotiabank Theatre  259 Richmond Street West, Toronto ON and other theatres on September 6, 2012. For more information visit http://www.cineplex.com/
Posted by James Karas at 12:25 AM