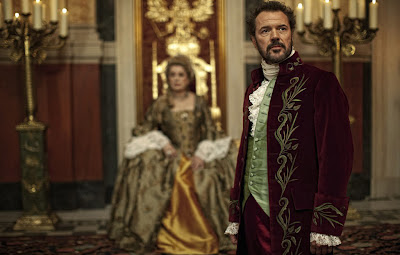 
God Loves Caviar is the catchy title of Iannis Smaragdis’ film which premiered at the Toronto International Film Festival on September 13, 2012. It is a biopic, a costume drama and an adventure story that has a deep philosophical and perhaps religious substratum. It presents the physical and spiritual journey of Ioannis Varvakis, an almost unknown Greek historical figure, who lived from the mid-eighteenth century until 1825.


Smaragdis, in addition to directing the film, is credited as one of the four script writers and with the idea of the story. In other words, the film is a reflection of Smaragdis’ ideas and ideals; it is a film by a philosopher director.


The outward story of Varvakis’s life provides ample material for a film full of adventures, love stories and displays of marvelous scenic tableaux and costumes.


Varvakis was an illiterate sailor who became a pirate in the Aegean robbing and destroying Turkish ships. He was captured by the Turks and escaped to the Russia of Catherine the Great where elegant manners, bewigged gentlemen and bejeweled and begowned ladies abounded. The rough-hewn, penniless sailor found a method of extending the shelf life of caviar and became extremely wealthy.


In his search for love, Varvakis married a woman (played by Olga Sutulova) who not only did not love him but also betrayed him with his teacher Kimon (played by Akis Sakellariou). (This treachery and infidelity will serve as an example of Varvakis’s spiritual growth and magnanimity when he eventually forgave both of them.)


Not having found love or any other fulfillment, our hero chucked everything in Russia and returned to Greece in search of freedom. The type of freedom that wealth cannot provide. At that time, Greece was in the throes of war against the Turks and more seriously in the midst of a civil war. Varvakis tried to help but he was considered dangerous for reasons that are not entirely clear and shipped off to prison on the island of Zakynthos.


I give this summary of the “adventure” plot to indicate that although it is a part of the film, it is not the main thrust of the movie. Smaragdis is more interested in Varvakis’s spiritual journey. Varvakis is in search of something much higher and deeper than the physical world around him provides. Inversely, he is perhaps driven by a higher force outside the physical world that he inhabits and to some extent controls.


At the outset of the film, Varvakis abandons his first wife and infant daughter Maria to go seek his fortune or perhaps himself. After escaping death in the hands of the Turks, he walks from Constantinople to St. Petersburg during the winter with nothing but the clothes on his back. We have started moving away from the strictly physical travel to the spiritual journey.


The events in Russia (second marriage, commercial success, reunion with his daughter (played by Marisha Triantafyllidou) and death of his son by his second wife) leave him unfulfilled and propel him towards further travel and search. The journey leads him back home to his roots in Greece.


Greece and the movement towards Greek independence and always lurk in the background. Varvakis keeps encountering a mysterious friend, Lefentarios, whose loyalties seem to be shifting. We know that he represents the emerging Greek nation in its struggle for liberation.


Varvakis encounters the even more mysterious Fisherman of God (Lakis Lazopoulos) and his spiritual transformation continues. He is immersed under water and his baptism and spiritual growth appears to be complete. Varvakis emerges from this as an old, Christ-like figure who is about to go through his own Passion.


On his return to Greece, as indicated, he ends up a prisoner of the British on Zakynthos where he dies with nothing but the company of his servant Ivan (John the Baptist, John the Evangelist?). He leaves his fortune to Greece but the old adage about that country seems to be fulfilled: Greece eats its children.


Smaragdis frames his film as a story told by Ivan to a few children on the British-held island of Zakynthos. Varvakis has just been delivered there in old age purportedly to a sanatorium but in reality to prison. Ivan acts as a narrator throughout the film and in the end he takes Varvakis out on a rowboat to die.


Smaragdis has assembled an international cast and as is almost inevitable not all of them are ideal for the roles. The German Sebastian Koch plays Varvakis. He has an expressive face and eyes that reveal his emotional turmoil. His accented English is neither Greek nor German and makes him Everyman. A stellar performance.


His assistant Ivan played by Russian Evgeny Stychkin is well done but I had a small problem with his telling of the story to the children. The children do not speak English and Ivan speaks a few words in Greek to them and then translates himself and continues in English. It is a minor but avoidable annoyance.


The Argentine-Spanish Juan Diego Botto plays Lefentarios, a mysterious Greek who seems to be working for other countries but we know instinctively that he is a patriot fighting for the liberation of Greece. The dapper Botto is excellent in the role.


Catherine Deneuve brings star power and elegance to the role of Catherine the Great. The German princess who became Empress of Russia speaks with a French accent.


John Cleese as McCormick sits behind his desk listening to the story of Varvakis and makes wry remarks. He is good but one wishes greater use could have been made of him.


The cinematography of Aris Stavrou and the Production Design of Nikos Petropoulos are quite stunning. From broad shots of the Aegean, to the court and bordellos of St. Petersburg to the battle scenes on the Acropolis, the film is a delight on the eyes.


The marriage of philosophy and adventure is not always easy to maintain. Throw in politics, love and infidelity and you have a rich mixture of ingredients fighting for prominence.


Smaragdis is largely successful in keeping all the elements afloat and reasonably balanced in a film that is worth seeing and pondering.
Posted by James Karas at 10:52 PM