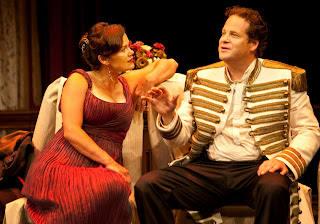 THE YEAR IN REVIEW

The season for most theatre companies starts sometime in September and ends in May. Then the summer festivals take over until the fall. The same arrangement applies to schools and the end of vacations, of course, and some day the calendar year may begin on September 1.

Theatre companies in Toronto follow the September-May schedule except for Soulpepper Theatre Company which follows the calendar year for its season. As such the end of the year is the appropriate time to review what they did during 2009 and comment about their 2010 season.

There is little doubt that if you want to see good plays in Toronto, Soulpepper is your best bet in terms of repertory, number of plays and quality of production.

Soulpepper produced a hefty eleven plays during 2009. All were written in the twentieth century. Three were Canadian, three American, two English, two Hungarian and one French.

The season opened in February with Tom Stoppard’s Travesties, a brilliant and intricate play that features verbal pyrotechnics and requires acting with precision and finesse. Unfortunately, Soulpepper’s production fell short of what one would expect of them or would want to see in a Stoppard play.

The wide-ranging references to art, poetry and fiction and the lines from The Importance of Being Earnest that are interwoven in the dialogue of Travesties fell flat. The great speeches and witty lines failed almost completely to connect with the audience leaving one with a bad evening at the theatre.

The second production was American David Mamet’s classic outpouring of vitriol and obscenities, Glengarry Glen Ross. If nothing worked in Travesties, the opposite was true of Glengarry. It was a pitch-perfect production that happened to have connections to the current subprime mortgage mess created by American banks’ insatiable greed.

With Joe Orton’s Loot we moved to a different type of morality completely. Joe Orton’s world is matter-of-factly amoral and vicious. The play opens with a woman in a coffin at centre stage. Her husband displays little emotion and is mostly concerned with the flowers while her son uses the coffin to stash away stolen cash.

The dialogue is like a sadistic Oscar Wilde and I am not sure if director Jim Warren captured all the blackness of the play but it was an enjoyable production none the less. Oliver Dennis, Nicole Underhay and Matthew Edison had the leading roles.

Clifford Odets’s Awake and Sing is set in the more familiar and congenial (for the audience) atmosphere of a working class apartment in New York in the 1930’s. It tells the story of a family (could be Greek, Polish or anything but in this case it is Jewish) that tries to make ends meet, maintain family traditions and morals in a new world and just survive. A moving production of the play’s several subplots with Nancy Palk’s powerful performance dominating the evening.

For its next production Soulpepper maintained a similar milieu. This time it was an immigrant family in Toronto in the 1970’s in David French’s Of the Fields, Lately, As in Awake and Sing this is a family drama in which a strong woman tries to effect reconciliation between her husband and her son. It is an emotionally charged play superbly directed by Ted Dykstra with marvelous performances by Diane D’Aquila, Kenneth Walsh, Eric Peterson and Jeff Lillico.

Billy Bishop Goes To War was the next production of the quintessentially Canadian play by John Gray and Eric Peterson. Bishop was the most highly-decorated Canadian war hero of World War I and the play about him has become the most frequently produced Canadian play. Ted Dykstra directed Peterson in the one-man show with Peterson paying some 20 characters. A planeload of kudos to Peterson and the production.

Edward Albee’s Who’s Afraid of Virginia Woolf? presents a family drama of a different kind, to put it mildly. Two couples meet for drinks after a party at a New England college. They could treat us to witty repartee à la Neil Simon or they could launch vicious verbal warfare and cruel games. They do the latter as they examine and reveal not only their lives but by extension American history. Diana Leblanc directed Diego Matamoros and Nancy Palk in stellar performances.

A married couple engaged in verbal warfare is at the center of Ferenc Molnar’s The Guardsman but the atmosphere is one of hilarity rather than brutality. The warring couple are actors and the jealous husband (Albert Schultz) has to pretend he is his wife’s (Kristen Thomson) secret lover in order to win her back. There are several layers to the deception and perceptions of the play all adding up to a thoroughly enjoyable night at the theatre. Molnar was a Hungarian playwright and you don’t see too many plays from that part of the continent. Take it as an added bonus from Soulpepper.

The promise of moving away from twentieth century drama and offering a Greek tragedy, unfortunately did not materialize. The brochure containing the 2009 productions stated that we will get Sophocles’ Antigone. It was to be “in a new adaptation by Evan Webber with Chris Abraham” which is enough to send chills up your spine but, eh, it’s better than nothing.

We did not get even that. We had to settle for Jean Anouilh’s version of the myth as he saw it during the Nazi occupation of France.

Liisa Repo-Martell and R.H. Thomson did fine work in the leading roles of Antigone and Creon. But director Chris Abraham never brought the production to life and the whole thing was a big disappointment. Soulpepper can and should do more classics and move away from the twentieth century.

The penultimate production of the year was Parfumerie by Miklós László, another Hungarian playwright whom you do not run into every day. We are in the spirit of Christmas and a romantic comedy where love triumphs is de rigueur. Parfumerie tells the story of two people who do not get along at work but who are carrying on a passionate epistolary affair. We all know how that is going to end! Oliver Dennis and Patricia Fagan are the lovers and Joseph Ziegler is the humane owner of the shop where they work. Morris Panych directs the heart-warming comedy.

Production Number 11 for the year was Dennis Lee’s Civil Elegies. This was poetry recital combined with singing with piano accompaniment. There are a number of unusual elements to the event. It is based on a poem by Lee, who was Toronto’s first Poet Laureate. It is about Toronto and it consists entirely of verse. No doubt there are other plays based on poetry but I am not aware of one that combines all of the above.

The show was put together by Mike Ross (who also performs it) and Lorenzo Savoini. Albert Schultz directed. This is unusual fare and all we can do is encourage them to give us more.

In 2010, Soulpepper will produce twelve plays in what appears to be a more restricted repertoire. Canadian content is increased to four plays, the Americans and the English get three each and the Russians and the Irish one apiece. Charles Dickens’ A Christmas Carol and Ivan Turgenev’s A Month in the Country are the two non-twentieth century offerings.

Four of the productions are revivals: Billy Bishop Goes to War, Glengarry Glen Ross, A Raisin in the Sun and A Christmas Carol were all seen in the last couple of years. They are worthy productions but there are countless plays out there that could have been produced instead of regurgitating recent successes.

John Murrell’s Waiting for the Parade, David French’s Jitters, Sharon Pollock’s Doc are the other Canadian plays and although one can quibble about their choices one cannot mount a serious argument against them.

Oh What A Lovely War by Joan Littlewood, Theatre Workshop and Charles Chilton holds a lot of promise and may be an interestingly compared to Waiting for the Parade, another war-time play. Ivan Turgenev’s A Month in the Country was produced a couple of years ago at the Shaw Festival and we could have waited for a while longer for another staging. That was the Brian Friel version and we will have to see what Susan Coyne has in mind in her adaptation of the play.

Joe Orton’s What the Butler Saw, a dark comedy, is to be eagerly anticipated as it comes hot on the heels of Loot. I have never seen Sharon Pollock’s Doc nor Brian Friel’s Faith Healer and I can hardly say anything about those choices. Arthur Miler’s Death of a Salesman is a classic that can be seen repeatedly with profit.

I could do without the revivals but that’s because I am not Soulpepper’s Chief Financial Officer or fundraiser.

One can always wish for more or different plays but one can also be grateful for a company that started on a shoe string and provides the richest and most varied theatre in Toronto.
______

The 2010 season starts on January 22 with previous of Billy Bishop Goes To War. It opens on January 26, 2010 at the Young Centre for the Performing Arts, 55 Mill Street, Toronto, Ontario. For more information telephone (416) 866-8666 or go to http://www.soulpepper.ca/
(Photo: Kristen Thomson and Albert Schultz in The Guardsman)
Posted by James Karas at 3:00 PM