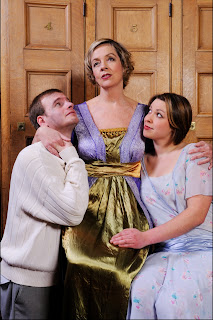 Noel Coward’s Hay Fever is an unlikely comedy. The Bliss family and their servant are spending a weekend at their country house in Berkshire. They are visited by four guests and nothing much happens. No one is murdered, there is no mystery to unravel or any plot to develop. Yet, Hay Fever, if done well, can be a very funny play. Ineptly done it is a monumental bore.

Alumnae Theatre Company gives the play a superb production, eliciting howls of laughter and providing a highly entertaining night at the theatre.

Coward provided lots the opportunities for a good director and cast to work with, however difficult it may seem. Judith Bliss (played to perfection by Dinah Watts) is a retired actress who is planning a comeback. Retired is a misnomer because she never stopped acting or taking theatrical poses on or off the stage. At one point Judith’s daughter Sorel (Tamara Lubek) tells her to “be natural” for a change. For the Bliss family being theatrical, self-absorbed and eccentric is being completely natural.

David (Hereward Pooley), the father who is a novelist and son Simon (Ken MacAlpine) complete the wacky Bliss family which gets some assistance in its bizarre conduct from their potty maid Clara (Anne Harper).

Each family member, unbeknownst to the others, invites a guest for the weekend. The guests become more like victims who need to plan and execute an escape after a night with the off-the-wall Blisses.

All the guests “fall in love” or are told they are in love or have a flirtation with one of the Blisses. Sandy (Leete Stetson) is cornered by Sorel and is caught kissing her in the library. Judith tells Richard (Jonathan Thomas) that she is in love with him and her husband must be informed immediately. The crafty Myra (Tina Sterling) tries to butter up David and they are caught kissing by Judith. The brainless Jackie (Kaitlyn Riordan) is supposed to be in love with Simon. That is a lot of activity for a play that has no plot and incidentally a lot of laughs.

The guests have become victims and the final act is a hilarious scene of them trying to escape from the Bliss house unseen. The self-absorbed Blisses get into an argument about the streets of Paris and the guests manage to escape behind their backs.

The play needs some astute and delicate handling. The lines are only funny if delivered properly. Each laugh depends on timing, delivery and the reaction of the recipients. Kudos to McDonald for orchestrating all and providing a fine production.

Dinah Watts leads the cast with a superb performance. She is allowed to overact, strike poses, gesture and modulate her voice. She does it impeccably. Pooley is hilarious as the somewhat disheveled novelist who finds himself accosted by an attractive woman. He and Sterling produce fine comedy.

The Bliss children are nothing if not theatrical and Lubek is especially good. Anne Harper’s maid was just what you would expect from a servant working for nutsos.
The English accents, so difficult to achieve at times, ranged from the acceptable to the excellent and the result was a very good night at the theatre.