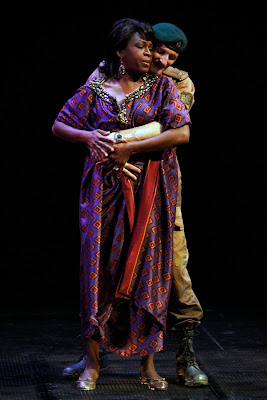 The Scottish pipers blared and the snare drums rolled as the stretch limos pulled up in front of the theatre to let out the luminaries. It was the opening of the Stratford Shakespeare Festival and the light drizzle did not stop some enthusiasts from sitting on lawn chairs under their umbrellas to watch the arriving glitterati. The Scottish band was more than usually appropriate because the opening offering of the Festival was Shakespeare’s Scottish play, Macbeth.

Macbeth is of course set in Scotland and tells the story of the overambitious thane and his murderous wife who butcher the king. Des McAnuff, the Festival’s Artistic Director, has decided to set the play in an imaginary modern-day African state in which the officers wear Canadian Forces uniforms, speak with a southern Ontario accent and call their country Scotland.

McAnuff does score some points. The play opens on a battlefield with submachine guns spraying bullets and hand grenades being lobbed. The stage is strewn with the bodies of dead soldiers and from among them rise the Weird Sisters who share the opening lines of the play.

There are some other highly effective scenes. For example at the end of the scene where Banquo (Timothy D. Stickney) is murdered and his son escapes, the lights go out in the confusion. This gives the crew a few seconds of darkness in which to bring the table and chairs and the lights go back on with a bang and we are in the banquet scene. Very effective.

The appearance of Banquo’s ghost at the banquet is effectively done with the actor being raised from a trap door and seated at the table and then lowered down.

That is the good news and I am afraid there is much more bad news in a production that treats most of Shakespeare’s lines matter-of-factly and the emotional range is extremely limited. It is as if the only thing we need is the bang-bang of guns and war without much need to pay attention to the characters or the iambic pentameters that they deliver. You would never know it from this production, but, yes, Shakespeare did write mostly in verse.

The star of the production and surely the main drawing card is Colm Feore as Macbeth. McAnuff will not allow him to display any more emotion than becomes a stiff-upper-lipped general. He strays away from that stricture a few times but it’s as if he is losing temporary control of his emotions. The rest of his lines even his great soliloquies are delivered without much emotion, without poetry and without effect. What a waste of talent.

Yanna McIntosh gets a little more leeway as Lady Macbeth and her mad-walking scene is fine except that she has her back to us much of the time. Se carries a lantern instead of a candle for no good reason. There is a connection between the candle that she carries in that scene and Macbeth’s later comment that life is snuffed out like a candle but details like that do not seem to concern McAnuff.

There is a scene in which Lady Macduff (Sophia Walker) and her children are murdered. Right after that the scene changes to England where Malcolm (Gareth Potter) and Macduff (Dion Johnstone) discuss the sad situation in Scotland. McAnuff changes the order and divides the English scene in two parts. That means that Malcolm and Macduff begin the scene in England. They stop and remain on the stage as the murder of Macduff’s family takes place in front of their eyes. This is a pathetic attempt to improve Shakespeare and the result is confusing, to put it at its highest.

The rest of the cast deliver their lines in workmanlike fashion. Special mention is deserved by Tom Rooney who shone as The Porter. He is the exception and garnered well-deserved applause.

McAnuff has directed Macbeth before. In fact he made his Stratford debut in 1983 directing Nicholas Pennell and Roberta Maxwell in the lead roles. It was a more orthodox production with the barbaric Scots dressed in sheepskins. He must have felt that he needed a bolder and more contemporary approach. Unfortunately the results are not commensurate with the ambition and we are left with a flat and unsatisfactory product that has too many gadgets and not enough Shakespeare. A very bad night at the theatre.

Macbeth by William Shakespeare opened on June 1 and will run until October 31, 2009 at the Festival Theatre, Stratford, Ontario. http://www.stratfordfestival.ca/