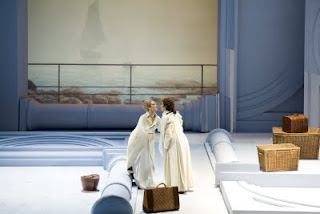 For $64, who was Demophon? And for double the prize who was Niccolo Jommelli and what do the two have to do with each other?

You are probably stumped, but Demophon was a legendary King of Thrace perhaps at the time of the Trojan War. His story is told by an obscure Roman writer of the first century A.D. named Gaius Julius Hyginus. In order to stop a plague, the king had to sacrifice a young noble woman every year drawn by lot. The king did not include his daughters in the draw. In protest, a noble named Mastusius refused to have his own daughter included in the draw and the king killed her. Years later, Mastusis took revenge by killing the king’s daughters and offering a bowl of drink to the king that contained his daughters’ blood.

The story fascinated the great poet and librettist Metastasio and in the early 1730’s he wrote a libretto based on a substantially changed version of that legend. The libretto was a hit and according to one source it became the basis of some eighty operas by 1800. The Neapolitan Jommelli (1714-1774) composed his first version of an opera based on Demophon in 1743 and revised it three times. He called the opera Demofoonte and it is fair to say that it has been largely ignored.

In the Jommelli/Metastasio version, it is that time of the year when King Demofoonte must choose a virgin to be sacrificed to Apollo. Dircea, daughter of the nobleman Matusio seems like an excellent choice. But there are a couple of insurmountable problems. First, Dircea is secretly married to Timante, the heir to the throne and has a child by him. Secondly, as a result of the latter act, she is decidedly not a virgin.

To make things worse, the King has arranged to marry his son Timante to Creusa a Phrygian princess in order to secure good relations with that country. His second son Cherinto is just bringing her over for the wedding to take place.

Princess Creusa arrives but Timante will have nothing to do with her while his brother Cherinto has fallen in love with her. The king is looking for a virgin to sacrifice; Matusio tells his daughter to make herself scarce and there is no end to complications. Dircea and Timante confess that they are married and are on the verge of being put to death when a letter appears indicating that Timante is Matusio’s son. He is married to his sister! We are about a century too early for Sigmund and Sieglinde in the hands of Wagner to do just that, therefore another letter is produced and all the complications are resolved.

The Opera National de Paris assembled a stellar cast and gave the opera a sumptuous production at the magnificent Palais Garnier. Conductor Riccardo Muti chose Jommelli’s fourth and final version (1770) for the work’s premiere by the Paris Opera.

Demofoonte is an opera seria but it straddles the classical period. It looks to Gluck and Mozart but its roots are still in the past. Jommelli provides some wonderful music and even if the plot creaks very badly at times you are carried by the arias and duets to the end without a hitch. King Demofoonte is sung by Russian tenor Dmitry Korchak. He has a light voice that is responsive to the baroque colorations required by the music. Interestingly, this light tenor is the deepest voice in the opera.

Jommelli provides wonderful arias or duets for everybody and Maria Grazia Schiavo sings a splendid Dircea with mezzo soprano Jose Maria Lo Monaco as her husband Timante. Countertenor Antonio Giovannini is Matusio, Dircea’s father and he gives a superb accounting of himself in the role. The excellent cast is completed by soprano Eleonora Buratto as Creusa and soprano Valentina Coladonato as Cherinto.

The Paris Opera production has an alternate cast that sang on June 20. The role of Cherinto was sung by Athenian-born Irini Kyriakidou. The up-and-coming singer has won several vocal competitions and has sung a number of roles in smaller opera houses. In November she is scheduled to sing the role of Diana in Offenbach’s Orphée aux enfers at the Thessaloniki Concert Hall.

Demofoonte is a thoroughly enjoyable opera. The characters are still some distance from being human. There is no Figaro measuring his bedroom or Leporello suffering day and night as Don Giovanni’s watchman. But despite that, it provided a great night at the opera.
Posted by James Karas at 11:22 AM