Jake Epstein is a talented Torontonian who has achieved numerous successes as an actor, singer and writer. He has performed on television and in live theatre in Canada, on Broadway and across the United States. But his greatest success to date  may be the show his has created telling us about his successes and failures. In Boy Falls From The Sky he offers a funny, touching and highly entertaining program that gives us glimpses of behind-the-scenes theatrical experiences and vignettes of his private life.

Epstein has mastered the art of storytelling. He knows how to modulate his voice. inject a dramatic pause in his narrative and keep the audience with him, while playing his guitar and singing snippets of songs. In the end, he earns a standing ovation.

The title comes from his performance as Spider man where he had to jump some forty feet from a ladder to the stage floor– many times. He controls the narrative tightly as he tells us of the preparation, the search for advice (fall of all fours with your face towards the stage floor) and the injuries he received leaving him flat in bed. The story is scary, moving and funny.

There are many experiences that he tells us about. He is hired as a dancer and the director notices that he can’t dance. The director asks him why he took the job if he could not dance. Why did you hire me without checking if I can dance? he asks. “You are fired” is the quick reply. 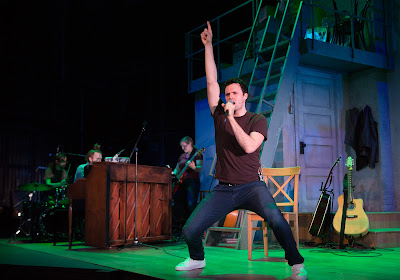 Justin Han, David Atkinson, Lauren Falls and Jake Epstein
Photo © Cylla von Tiedemann
His acting career, preceded by love and enthusiasm for performing, started modestly as the paper delivery boy in Thornton Wilder’s Our Town at the Royal Alexandra Theatre in 1999. His repertoire expanded when he got the part of a hotdog inside someone’s stomach in a skit in his high school drama class.

He gets curt dismissals but he has big successes as well like getting the role of Gerry, Carole King’s husband in Beautiful: The Carol King Musical on Broadway. Epstein does not just mention this and it would not be funny if he did no more. Carole King told him not to make her former husband a villain. On the first curtain call and after every performance after that  Epstein was roundly booed  because he represented a bad man. How do you deal with “a wall of hatred”? he asks.

Along with the many stories about life in the theatre as an aspiring actor, Epstein tells us about his supportive parents (ten and a half hour drives to New York), his sister and his up-and-down relationship with his girlfriend (he lives in New York , she lives in Toronto), but things work out and he marries her. He lands a great part and people are congratulating him on his success. He has to brazen out the fact that he was fired from the role.

Boy Falls from the Sky has David Atkinson as music director and keyboard player, Lauren Falls paying bass and Justin Han on drums. They provide the musical accompaniment for Jake’s middling singing and help with the pacing and variety of the show.

Again, as much as Epstein deserves kudos as a successful actor and singer, he deserves even more recognition for being able to create such  an entertaining show from his own experiences. It is not an easy achievement but with the help of director Robert McQueen he has developed something intelligent, witty, refreshing and marvelous.

Boy Falls from the Sky written by Jake Epstein and developed by Epstein and Robert McQueen continues until May 29, 2022, at the Royal Alexandra Theatre, 260 King St. W. Toronto, Ont. www.mirvish.com