The Blyth Festival faced the consequences of the Covid-19 pandemic with lumber, nails, screws and a lot of community support. They could not produce any plays indoors so they built an outdoor theatre on a sprawling lawn at the edge of the village. Inclement weather meant cancellation of some performances but there were far more fair-weather than rain-drenched days. You had to walk a few hundred yards on a gravel road to the Harvest Stage on Gypsy Lane but you were warned to leave your high heels behind.

This season they produced five one-actor shows  of about one hour each to run between August 11 and October 3, 2021. I saw Jewel by Joan MacLeod, her first play, which originally premiered in 1987 at the Tarragon Theatre. In the Blyth Festival production,   Rebecca Auerbach plays Marjorie Clifford, directed judiciously by J.D. Nicholsen.

Jewel is a love story that has a tragic result but ends on a note of hope. The backdrop for the plot is the sinking of the mammoth Ocean Ranger oil rig off the coast of Newfoundland on Valentine’s  Day 1982. All 84 people on board perished. 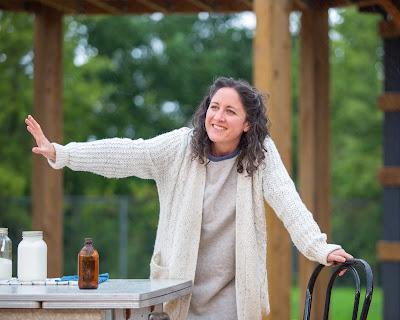 Marjorie, a simple woman, tells us her life story beginning with memories of Valentine’s Days. When she was very young cutting out paper hearts to give to the most popular boy in primary school was an expression of nascent love. At age 15, one of her friends was described as mature meaning that she had big tits, smoked and was stupid.  In later teens, the girls discovered sleepovers, cigarettes and booze – lots of booze.

Marjorie is in rural Alberta and, however haltingly and amusingly, finds love and marries Harry. They have a farm but Harry goes away to work in the Alberta oil fields and Marjorie finds amusement with a friend whose husband is away frequently. And they drink.

Harry gets a job on the ill-fated rig, the Ocean Ranger, off the coast of Newfoundland and the couple looks forward to financial stability to be added to their loving relationship. The rig sinks on Valentine’s Day, the very date of years past that Marjorie recalled so fondly. The last she hears from Harry is a radio message broadcast on Valentine’s Day 1982, the day he died. He must have sent it in the day before.

Marjorie tries to deal with her loss and her grief. She talks to Harry as if he were still listening to her. She goes for grief counselling including a widows’ group run  by the Elks. She is told that being a widow is like checking into a motel for a night and staying there for the rest of  your life.

She imagines and relives Harry’s death on the rig. She tells us the minutiae of her daily existence. She comes to tentative terms with herself and removes her wedding ring from her finger, her jewel. Love proves to be stronger than grief but life must go on and the play ends on a positive note.

Auerbach is on stage for an hour relating all her experiences and memories from childhood into widowhood with all their permutations. She moves around the stage, drinks from a couple of beer bottles - hers and Harry’s – and listens to the radio for announcements and some music. The Valentine’s Day wishes are important for her, especially the last one.

She is engaging, moving and funny. It is a tough job and she does splendid work. The problem is that she is facing a socially-distanced, masked audience that, it seems to me, is seriously unresponsive. Maybe they laughed and cried under their masks but the theatre is a joint, communal experience not a private event. The production deserves a bigger and more responsive audience where every line of the play evokes a response.

The Blyth Festival showed enormous gumption in scheduling a full season under conditions that would have frightened most theatrical producers in this Prohibition Era of Pandemic Abstinence.