Henrik Ibsen’s Peer Gynt is a sprawling, episodic play, written in verse in 1867. It has its defenders, but it is not an easy play to produce. Now David Hare has updated the play and he has called his Peter Gynt simply marked as “after Henrik Ibsen.”

It is still a big play with dozens of characters and numerous scenes that requires well over three hours to perform. Much of it is riveting theatre but the arc of Gynt’s life eventually begins to sag.

Hare moves the play from Norway to Scotland and Gynt’s adventures take us to Florida, North Africa, the sea and meetings with an array of people, cowgirls, hyenas, mythical characters and others. 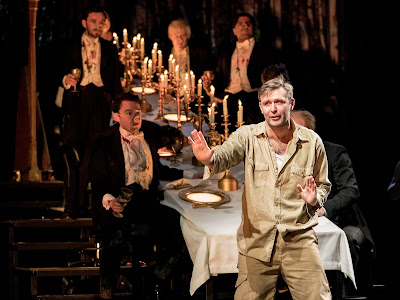 The play opens in Scotland where Gynt (James McArdle) is returning from the war. He is greeted by his mother Agatha (Ann Louise Ross) and we quickly get a taste of his character. He tells his mother that he was on a great mission and begins describing the plot of The Guns of Navarone as if it is what he did. Peter is a fantasist, a liar, a dreamer, a braggart and a narcissist. But he is quite lovable because he is also useless, and we admire his ambitions and grandiose view of himself. Hare provides Gynt with a quarry of zingers that evoke considerable laughter.

Peter kidnaps Ingrid (Caroline Deyga), his former girlfriend on her wedding day and has sex with her. She asks him to marry her and he refuses. When she asks him why he went with her, he replies that the question requires a level of self-knowledge that he simply does not possess.

Peter is his mother’s son. Agatha is as much a fantasist as her son and she blames herself for her son’s character.

Peter does become a millionaire, the owner of a golf resort in Florida, a newspaper mogul and an obnoxious person but with a sense of humour. He pities anyone who does not have an adjective that describes him.

Peter’s travels and adventures continue through dreams, sea storms, travels, bankruptcy and encounters with the supernatural. Unfortunately, by the time all five acts come to an end with the numerous scene changes I found my attention flagging. I felt I had seen enough of the satire on individualism, uncontrolled capitalism and recent current events.

Hare cannot resist taking swipes at current politicians and you may well guess that a gold resort in Florida is not a coincidence.

James McArdle is on stage almost continuously and he deserves a standing ovation for his superb acting. Gynt goes from brash youth to old age where he is facing death. We see him in numerous guises and McArdle’s acting and stamina are admirable.

Ann Louise Ross is outstanding as Agatha, a tough, wiry woman who has a keen eye and an acerbic tongue. Anya Chalotra plays Sabine, the woman Peter falls in love with and she does a fine job in the role. The veteran Oliver Ford Davies is a mellow and convincing Button Moulder.

Jonathan Kent’s directing is impressive with the number of cast members and scenes involved but there was not much he could do about the length of the play. He had to deal with the Olivier’s massive stage which is never easy to maneuver in.

Peter Gynt is the type of play that only an organization like the National Theatre can tackle in terms of financial and talent requirements. The production has many virtues but in the end the play lacks the strength to carry us through more than three hours of theatre.
_____________
Peter Gynt by David Hare after Henrik Ibsen continues in repertory until October 8, 2019 at the Olivier Stage, National Theatre, South Bank, London, England. www.nationaltheatre.org.uk.

James Karas is the Senior Editor - Culture of The Greek Press. greekpress.ca
Posted by James Karas at 5:44 PM