SISTERS – REVIEW OF SOULPEPPER’S PRODUCTION OF ADAPTATION OF WHARTON NOVELLA

Sisters starts auspiciously enough. The stage of the Michael Young Theatre resembles a cubicle which is open on all sides. We see a man and a woman at the rear of the stage and then are led into the cubicle which is a shop run by two seamstresses, the sisters Ann (Laura Condlin) and Evelina (Nicole Power). The man of the opening scene is Herman Ramy (Kevin Bundy) who runs a clock shop around the corner from the sisters’ business.

They are not in their first blush of youth and they have a hard time making ends meet. We meet their upstairs neighbour, the ebullient dressmaker Mrs. Mellins (Karen Robinson) and a couple of customers to get the flavour of their business. But most importantly, we meet Ramy. He is of a certain age and he has or had some serious health problems but in the meantime he is interested in one of the sisters and one of the sisters is interested in him. 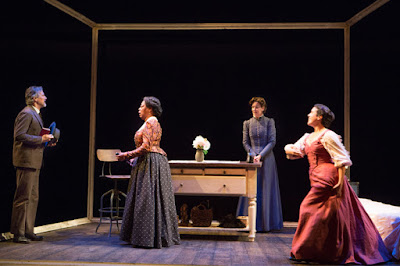 Kevin Bundy, Karen Robinson, Laura Condlln, and Nicole Power. Photo: Cylla von Tiedemann
Rosamund Small’s adaptation of Edith Wharton’s 1891 novella Bunner Sisters moves away from the original text rather quickly. Dancing is mentioned near the beginning of the play and Mr. Ramy walks in and waltzes a few turns with one of the sisters.

The play continues to move from realism to dream or nightmare sequences to the point where one is not sure where events take place. The core story of Ann’s self-sacrifice for her sister remains. She rejects Ramy’s marriage proposal and allows her sister to marry him

Mr. Ramy is not the decent if lonely gentlemen that the sisters thought him to be. His health problem is far more serious and disturbing than anyone thought, his description of his former position is a lie and in the end he proves to be a horrible husband.

The two loving sisters lose touch with one another and the play takes us on Ann’s search for her sister that includes train rides and incessant searching. Eventually there is a type of reconciliation but I won’t spoil it for you. 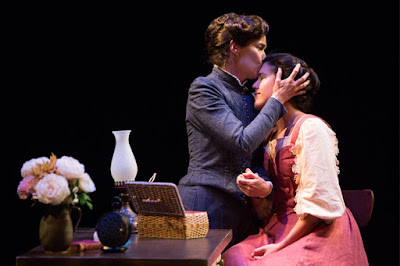 Laura Condlln and Nicole Power. Photo: Cylla von Tiedemann
Sisters is the story of the world of two sisters falling apart, of deterioration, separation and a tragic conclusion. Rosamund Small, a young playwright from Toronto, has taken Wharton’s languid telling of the tragedy and tried to add her own dimension to it by changing time sequences, adding dream or nightmare sections and in the end adding more confusion than clarity. She does not owe any loyalty to Wharton’s story but we expect more clarity than we get.

Bundy’s character is not well developed in that we see him as the would-be gentleman, awkward, at first, ill-tempered and perhaps stupid later on and then we mostly hear about him.

Condlin’s Ann is an attractive, strong and capable sister willing to sacrifice her happiness for her sister. We are not sure about Evelina who converts to Catholicism during a horrid marriage. There is an explanation and Power gives a fine performance.

Michelle Tracey deserves credit for an imaginative and fluid set. Peter Pasyk directs a play that is unfocused and in the end unsatisfactory.
__________
Sisters by Rosamund Small bases on Edith Wharton’s Bunner Sisters opened on August 29 and will play until September 16, 2018 at the Young Centre for the Performing Arts, 55 Tank House Lane, Toronto, Ontario. www.soulpepper.ca  416 866-8666.