In 1966 composer Harry Somers with librettists Mavor Moore and Jacques Languirand undertook the task of writing an epic opera on Canadian themes in a country not accustomed to epic stories or even native operas for that matter. The result was Louis Riel which was first produced in 1967 to celebrate Canada’s 100th birthday. There have been a few productions of the opera since then but it has not exactly joined the standard repertoire. The COC produced it in 1975 and let it collect dust for about 41 years. Canada’s 150th birthday seemed a good time to bring it back.

Louis Riel is a sprawling work in seventeen scenes spread over about a dozen locations and covering about sixteen years. The focus of the plot is the Metis leader who was seen as a prophet, a warrior against Satan, a gifted leader of Canada’s indigenous people, a lunatic, a religious fanatic and a traitor who was eventually executed as a criminal. The plot also deals with mendacious politicians like Sir John A. Macdonald, the Catholic Church, racist Canadians and the lot of Metis and First Nations Canadians. 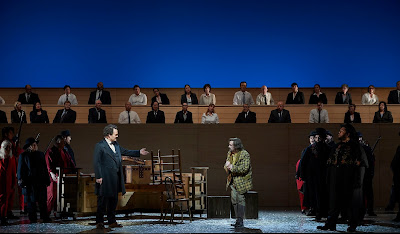 The toughest role belongs to Riel and it is done superbly by baritone Russell Braun. He has to portray the complex Riel from the religious zealot who thinks he is called by God to do His work, to the teacher and family man who is tempted to abandon politics, to the firebrand leader and in the end the person accused of treason who must choose between the defense of insanity or justification for his actions. That is a daunting array of facets that require vocal strength and tone and Braun does it with assurance and panache.

The opera is sung in English, French, Michif and Cree with surtitles in all four languages. I could not tell difference between Michif, the language of the Metis and Cree but the approach showed respect for both peoples.

There were moments when there was a great deal of dialogue moving quickly and it was difficult to follow the surtitles and watch the action on stage. 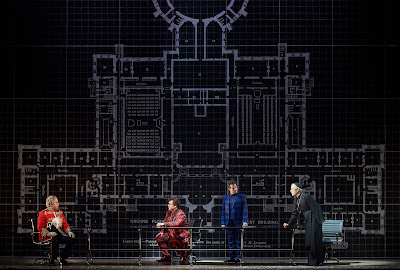 (l-r) Peter Barrett as Col. Garnet Wolseley, James Westman as Sir John A. Macdonald, Jean-Philippe Fortier-Lazure as Sir George-Étienne Cartier and Alain Coulombe as Bishop Taché . PHoto: Michael Cooper
Director Peter Hinton, Set Designer Michael Gianfranco and Costume Designer made no attempt at giving us a realistic representations of the events. The set consisted mostly three walls but at times the chorus was inserted in rows of seats at the rear. The scenes in Ottawa, the church and Riel’s house made appropriate changes to indicate the locale.

Johannes Debus conducted the COC Orchestra in an impressive performance of the largely unfamiliar twists and turns of Somers’ music.

Louis Riel is remarkable by just being there. It is a Canadian opera, about a major event in Canadian history, produced by Canadians with a Canadian cast. But this is only the third time that the COC has staged it. First in 1967, then in 1975 and now in 2017. Those are very long coffee breaks. Opera goers who are used to repeated viewings and therefore familiarity with Mozart, Verdi, Puccini and the rest do not get a chance to get to know this opera. The production was greeted with mostly polite applause. If the opera was better known, the applause would have been far more enthusiastic.

Can we get a reprise, a DVD, a broadcast on television, a new production in a few years?

Let’s hope that we will get a more timely exposure to the opera than it took for the “revival” of Louis Riel. He was executed in 1885 for treason but in 2016 his portrait was placed in the legislature building in Winnipeg and he is recognized as the founder of the province of Manitoba!
_________


Louis Riel by Harry Somers with a libretto by Mavor Moore with Jacques Languirand opened on April 20 and will be performed seven times until May 13, 2017 at the Four Seasons Centre for the Performing Arts, 145 Queen Street West, Toronto, Ontario. Tel:  416-363-6671. www.coc.ca
Posted by James Karas at 7:55 PM