WESTERN, a play with music – REVIEW OF NEXT STAGE THEATRE FESTIVAL PRODUCTION

The Toronto Fringe’s Next Stage Theatre Festival presents plays that are innovative, push the boundaries of conventional drama and often are works in progress.

WESTERN, a play with music by Matthew Gorman (text) and Gordon Bolan (music) may have a portion of all those characteristics and faces all the pitfalls of such an  endeavor.

Jocelyn Adema on fiddle and Gordon Bolan on guitars and banjo play a number of songs from “Amazing Grace” to “Someday I will see you in heaven” and provide instrumental accompaniment to some of the action and some sound effects. That is the “with music” part of the title and it does provide a “Western” feel even if the play is set in that milieu only tangentially. 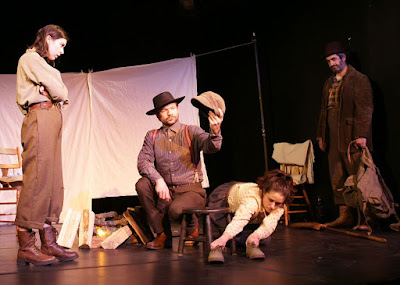 The cast of Western, a play with music.
The play is presented by four actors, two men (Sam Kalileh and Brendan Murray) and two women (Mairi Babb and Caroline Toal). The music, some of the accents, the sheriff with the Stetson and the set suggest that it is set in the West but as far as I could tell it was set in a fantasy world.

The plot and the dialogue are opaque and frequently confusing. There is a murder and a search. There is the story about the rabbit and the search for the murderer but all plot turns are uninteresting or completely forgettable. The fantasy world of the West that Gorman wants to create and portray simply does not come off.

The four characters involved seem to have names according to the programme, but I do not recall hearing them called by their name during the performance. That may be a sign of how much difficulty I had focusing on the action. According to the actors’ biographies part of the programme, Mairi Babb is “Nance”, Sam Kalileh is “Reach,” Brendan Murray is “Dirt” and Caroline Toal is “Jenet.” No doubt the names give clues to the characters but I missed them as I must have missed their names. The cast list in the programme does not indicate what parts the actors play which is annoying.

WESTERN may well be a play in gestation. Gorman and Bolan no doubt have a vision of the world they want to create in their play and the dramatic effect of their creation. They need to do it more clearly and evocatively so that they share their vision with us.
_____
WESTERN, a play with music by Matthew Gorman (text) and Gordon Bolan (music), directed by Geoffrey Pounsett will run until January 15, 2017 at the Factory Theatre, 125 Bathurst Street, Toronto, Ontario. www.fringetoronto.com/
Posted by James Karas at 11:19 AM