The Stratford Festival’s production of The Hypochondriac is a hilarious piece of theatre and you could hardly do anything better than to see it in the waning days of summer and laugh wholeheartedly. If you have to choose between reading this review and ordering tickets to see it, choose the latter. I have to write a few hundred words. It is part of the job, you see.

Moliere wrote some of the best comedies since Aristophanes. But with classics one always encounters the Wife of Bath’s conundrum about women which applies even more aptly to translations: is she is beautiful she will be unfaithful; if she is faithful, she will be ugly. With Moliere the choice is never that drastic (nor is it true with regard to women) because he is funny even in a mediocre translation. But in Richard Bean’s version director Antoni Cimolino has found a text that is faithful in spirit to Moliere’s play and resonates with modern audiences. Did I say it is hilarious? 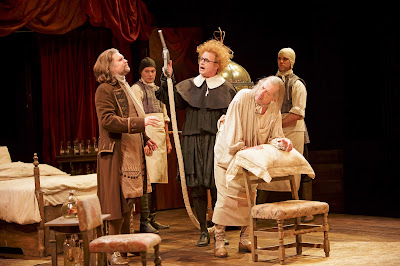 Members of the company in The Hypochondriac. Photography by David Hou.
Bean’s new version with a commedia dell’arte show thrown in and much more, the result is a colourful and vibrant production.

When you have a comic star like Stephen Ouimette as Argan, the hypochondriac of the title, you mop up your forehead with relief about your lead actor and go to solve other problems. Argan suffers from every disease for which there is a Latin name but his specialty is ailments of the lower intestine. He is prescribed every medication that the doctors’ imagination can conceive and his rectum withstand.

Ouimette’s Argan is cranky, bilious, cheap, cantankerous and very funny as he gets enemas every day, is harassed by his housekeeper, disobeyed by his daughter and is a man near the end of his rope. He times his lines with precision, plays the would-be sick with marvellous effect and he does not miss a beat in his characterization of the foolish Argan.

He has good company to play against. His lippy no-nonsense maid Toinette (Brigit Wilson) gives more than she takes from him despite the fact that she has to clean the result of his cleansing clyster. When he asks if she will help him kill himself, she replies “sure, when?” A spirited and superb performance by Wilson

Argan’s avaricious wife Beline (Trish Lindstrom) wants him dead and refuses to let him touch her. Marital nastiness can be funny and Lindstrom is good at it.

Ben Carlson plays the sensible Beralde who tries to bring some sanity into Argan’s life with no success. Carlson is pitch-perfect in the role.

Amid the chaos, the bodily fluids and the ugliness, we have the lovers: Argan’s daughter Angelique (the lovely Shannon Taylor) and the handsome Cleante (Luke Humphrey) who will defeat all the obstacles placed in front of them and love will triumph. 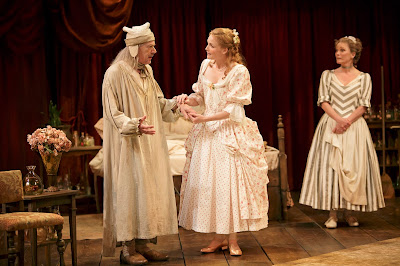 From left: Stephen Ouimette as Argan/Molière, Shannon Taylor as Angelique/Armand Bejart and Brigit Wilson as Toinette in The Hypochondriac. Photography by David Hou.
The Hypochondriac is, of course, a frontal attack on the medical profession which was more quackery than medicine in Moliere’s time. The best part is that it resonates with today’s conditions. A specialist is someone way above a doctor and just try getting an appointment with one. Monsieur Diafoirerhoea (Peter Hutt) and his son Thomas (Ian Lake) and all doctors are ridiculed mercilessly and the audience responded warmly.

Designer Teresa Przybylski, Choreographer Stephen Cota, Commedia dell’Arte Coach Perry Schneiderman and Juggling Coach Doug DeForrest deserve special praise. There are dancers, jugglers and singers in the production that give additional energy and colour. There is a tent on the set as if these were travelling players putting on a show to entertain everyone. They do.

Cimolino directs the play with his usual attention to detail, timing and inventiveness. A seemingly innocuous line can bring a laugh. Just time it perfectly – a slight delay, a quicker reply, an aside, a change in intonation and you have evoked laughter, pleasure and a great night at the theatre.
_____

The Hypochondriac by Moliere in a version by Richard Bean continues in repertory at the Festival Theatre, Stratford, Ontario until October 30, 2016. www.starfordfestival.ca
Posted by James Karas at 1:04 AM