FALSTAFF LIVE IN HD FROM THE METROPOLITAN OPERA - REVIEW 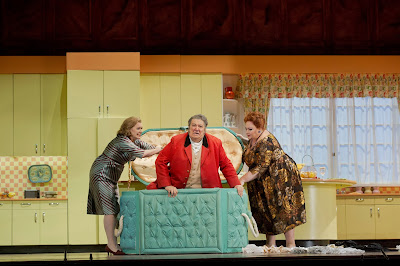 
The Metropolitan Opera delivered an exceptional production of Verdi’s Falstaff in its last transmission for 2013.


Falstaff has ten roles, 4 women and 6 men. The women easily outclass and outsmart the men and control the action of the opera around the mock-heroic fat knight.


The men with the exception of the lover Fenton are scoundrels or idiots. The women are smart, scheming and in the end triumphant.


Ambrogio Maestri made a masterful Falstaff, singing with assurance, ease and resonance. He is a big man with expressive and naturally comic features which he puts to splendid use. Despite his size, Maestri moves with grace and comic finesse. A seriously funny and fine performance.


Lisette Oropesa and Paolo Fanala are the young lovers Nannette and Fenton who deliver some lovely singing and outwit the older generation.


Robert Carsen’s production shows imagination and brilliance in conception and execution. He sets the story of the fat knight and the merry wives in the 1950’s. The Garter Inn becomes a fancy hotel where we find Falstaff occupying a large bed with dozens of trolleys with plates and empty bottles on them strewn around. We have a glutton and a bon vivant enjoying life to the hilt. When Pistol( Christian van Horn) and Bardolf (Keith Jameson) refuse to deliver his letters to Meg and Alice, there is a bellboy who will do it. The only complaint I have about the set is that on the movie screen it did not always appear well-lit.


Falstaff’s suite is transformed into a hotel dining room of the era. After that, we find Mistress Quickly, Alice, Meg and Nannette in a huge and meticulously arranged kitchen. In the movie theatre, we are treated to a detailed view of what seem like countless kitchen gadgets and utensils.


The ladies are well-dressed or overdressed by Costume Designer Brigitte Reiffenstuel as middle-class or better women who like to laugh, giggle and plot. The atmosphere is bright and comic and Sir John’s shenanigans and Ford’s (Franco Vassallo) jealous rages complete the comic scene. Ford shows up with a detachment of cronies and searches up and down and throws everything in sight in the air and on the floor while searching for Falstaff. A well done, comic scene.


Falstaff ends up in a stable after floating up from the waters of the Thames. There is a horse munching hay while Falstaff comes to on a pile of the same stuff. The stable is transformed into the park where Falstaff is humiliated, the lovers united and the fools shown up.


Carsen has an integrated and fully-realized conception of the opera that works exceptionally well.


Conductor James Levine has become almost a folk hero to New York audiences who greet his appearance with wild applause. He and the Metropolitan Opera Orchestra deserve the ovation.
_____

Falstaff by Giuseppe Verdi was shown Live in HD on December 14, 2013 at the Coliseum Scarborough Cinemas, Scarborough Town Centre, 300 Borough Drive, Scarborough, ON, M1P 4P5, (416) 290-5217 and other theatres across Canada.  For more information: www.cineplex.com/events
Posted by James Karas at 12:46 AM