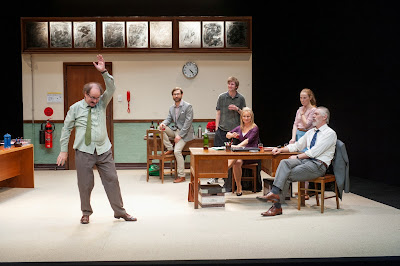 Vere (Faith) is a brilliant, if flawed, play by Australian playwright John Doyle that is now playing at the Drama Theatre in the Sydney Opera House. The play examines the terrible subject of dementia and its effect on the life of a brilliant physicist at the peak of his career.

It is the end of term and Professor Vere (brilliantly played by Paul Blackwell) bids farewell to his students and tells them that he is going to Switzerland to participate in a conference on the Higgs boson or particle. His participation in the research leading to the discovery of the particle is a monumental achievement and Vere is rightly excited about attending the conference. 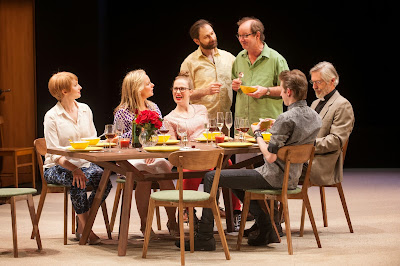 The professor is then told that he is suffering from dementia “with all the bells and whistles.” It means that his mind will quickly degenerate.

The rest of the first act takes place in a staff room where the professor has drinks with some colleagues. They are a colourful, foulmouthed and often funny bunch. Some of their jokes or cracks are so esoteric that only other physicists could get them. “There is a sign in Munich that says that Heisenberg may have slept here” is one example and I almost got the joke thanks to Michael Frayn’s Copenhagen.

Vere’s mind begins to deteriorate as he briefly hallucinates about seeing his long-dead wife but relatively little time is spent on his pending dementia.

In the second act, Vere’s dementia has almost destroyed his brain except for moments of lucidity. He defecates on the floor and his family frantically tries to clean up the mess before the pastor with his wife and daughter (Matilda Bailey) arrive for dinner. We are treated to some low and obvious humour.

The fundamentalist pastor wants to save Vere’s soul from going to hell and maintains his belief in the creation of the world as described in Genesis. Truth is revealed by God and not discovered by human reason and imagination, according to the pastor. The juxtaposing arguments are brilliant and at the same time entertaining.

The play’s title and theme are related to the life of Vere Gordon Childe, an Australian archeologist who died in 1957. Childe apparently put an end to his life because he felt he was losing his faculties. The play is not clear about this but that act and the author’s father’s dementia were the impetus for writing the play.

Some of the dialogue and the structure of the play are reminiscent of Tom Stoppard’s work, especially Arcadia which has the same structure. As is said, much of Doyle’s humour in the first act simply went over my head and I suspect it did the same for most people in the audience. By contrast, in the second act, there was a tendency towards farce at the beginning but otherwise the humour and the pathos were real and affecting.

Paul Blackwell gives a terrific performance as the decent, brilliant and ultimately pathetic victim of an illness that he can do nothing about. He knows what will happen and the horrors of it are indescribable.

Morrell is superb as the Vice Chancellor and Pastor as is Rebecca Massey. Matthew Gregan plays an awkward, stammering, boorish academic in the first act and a callow, religious youth in the second act.

The sets by Pip Runciman are Early Ikea. The staff room and Vere’s house are decorated with cheap furniture and doors that look as if they were stolen from a construction site.

Director Sarah Goodes does an outstanding job in bringing out the humour and pathos of the play. The final scene is not surprising even after a cursory look at the programme notes but I was hoping for something more visually stunning that simply did not materialize.

Despite some flaws, it was still a thought-provoking and moving night at the theatre.