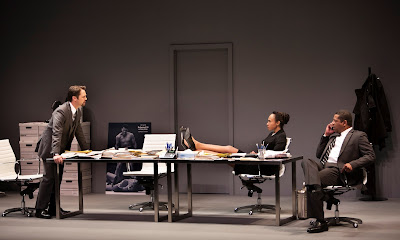 
Canadian Stage has brought David Mamet’s Race for its premiere production in Toronto at the Bluma Appel Theatre. As its title states, the play is about racism in America, perhaps the single most destructive force in that country. The play is supposed to examine the subject afresh in a searing fashion but we get little more that some talking heads parading familiar views.


The plot and structure of the play which opened in New York in 2009 are pretty straightforward. Charles Strickland (Matthew Edison), a rich white man, is charged with raping a young, black woman. He has difficulty finding a lawyer who will take his case but there are two legal stars in town who will take him on, reluctantly. Jack Lawson (Jason Priestly), a white lawyer and the aptly named Henry Brown (Nigel Shawn Williams), a black man, will represent him.


Our credulity is strained quickly. A wealthy man cannot find a lawyer for a sensational case? All he has to do is wave his cheque book and the lineup will start forming.


Lawson and Brown have a young and pretty black woman lawyer named Susan (Cara Ricketts) who lied on her job application. She stated that she had gone to Venice on a trip to Italy while she had in fact only visited Rome! Now that is pretty serious stuff. Lawson had investigated her before hiring her and that is what he had come up with.


We are faced with a seriously artificial and credulity-straining situation and the arguments about racism and relationships among the three lawyers will revolve around the revelations about the alleged rapist’s actions and the police investigation.


In the opening scene the duty of a lawyer representing person charged with a crime is set out fairly accurately. The lawyer assumes that his client is not guilty and within well-established rules puts forth the best arguments on his behalf. Whether the lawyer believes his client’s guilt or innocence is irrelevant. The lawyer is an advocate; not a judge.


Lawson, Brown and Susan forget those fundamental principles fairly quickly and seem to worry about the guilt or innocence of their client. At one point Lawson even asks Charles “did you do it?” A second-rate lawyer would never ask that question, let alone a star defender. Whether the accused did it or not is irrelevant. The question is: can the prosecution prove its case beyond a reasonable doubt. If it can, the accused is convicted; if it cannot, he walks away.

One of Mamet’s points in the play is that if a white man were charged with rape fifty years ago, he would have been found not guilty. Same facts today and he is convicted. The evidence has not changed but the calendar, according to Mamet, has changed. Are we to take this as a leap forward in American justice, that white rapists are being finally convicted of heinous crimes that they would have gotten away with half a century ago? I doubt it.


Edison is not particularly convincing as the wealthy, white man who is a potential or falsely accused rapist. He is rather bland and more of a convenient tool for the arguments of the play than a real person.


Priestly must be a big drawing card for Canadian Stage. He does a decent job of presenting Mamet’s arguments but falls short of generating any legal, political or social sparks.


Brown is not a particularly taxing role for Williams and the same applies to Ricketts. Saying that an actor makes a role look easy may be taken as a compliment to the actor if not necessarily to the author.


Daniel Brooks directs the pay as strictly instructed by Mamet’s direction to follow the script closely. Every author has the right to jealously protect his work but Mamet’s attempts go beyond that into a display of sheer arrogance. The script contains a laughable Talkback Restriction which forbids any discussion of the play until two hours after the performance. It imposes a $25.00 penalty as reasonable compensation for the actual damage which David Mamet will suffer from a violation of the Talkback Restriction. This may well be said tongue-in-cheek but I doubt it. The clause is clearly drafted by a lawyer and a touch of humility on the part of Mamet may be more a propos than the legal mumbo-jumbo of the Restriction. The tired arguments presented by the play are forgotten even before the two-hour limitation period expires and there is little danger of any burning desire for “discussion of any type related to the Play.”
______


Race by David Mamet will run from April 7 to May 5, 2013 at the Bluma Appel Theatre, St. Lawrence Centre for the Arts, . www.canadianstage.com
Posted by James Karas at 8:06 PM