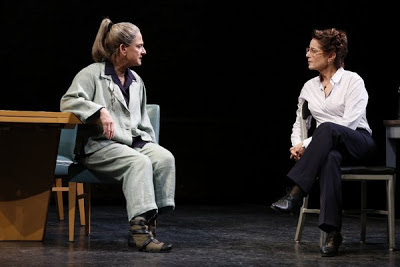 
The Anarchist, David Mamet’s new play lasts barely an hour and a quarter but the author throws so many arguments and ideas at you, that it sets your head spinning. There are only two characters, Cathy (Patti LuPone) and Ann (Debra Winger) who engage in a lengthy discussion and you eventually realize that Cathy is in prison and she is applying for parole to Ann.
If you have any pre-conceived notions about a prison environment or an application for parole, toss them away. In this play you will consider yourself lucky when you figure out what Cathy did and what she is talking about. What’s more, Ann not only follows what she is saying, but she more than keeps up her end of the argument. This may not apply to everyone in the audience. Ann is the warden and she will submit a report and recommendation to the parole board. She is a brilliant woman and all wardens and prison officials will be proud of her even though they don’t understand what she is talking about.
I digress. We eventually figure out that in her youth Cathy was an anarchist and she killed two police officers. She has been convicted of murder and given an indeterminate sentence. Thirty five years later she is applying for parole.
The discussion or perhaps arguments between the two women are wide-ranging and seesaw between them with each getting the upper hand on occasion. Wide-ranging? There is religion, philosophy, psychology, personal relationships, private thoughts, sexual preferences and – that is just a partial list.


Cathy, a Jew, has found redemption in Christ and believes that she deserves to be set free. Her father is dying and she wants to see him. She falls short of accepting responsibility for her murders and all the rest of the sophistic arguments fail to convince Ann to recommend her  release.


Ann is leaving the prison (end of her career or moving to another institution, we don’t know) and even though she can keep up and at times best Cathy at her sophistry, she asks repeatedly one concrete question. Where is your accomplice?


Cathy was not alone when she murdered the officers and she has kept in contact with her accomplice but she refuses to divulge her whereabouts disingenuously protesting ignorance.


The play moves largely on a cerebral level and emotional manipulation is fairly minimal. These women may have barren emotional or sexual lives but we are only allowed brief glances at those areas. There is no emotional climax or even a breakdown in the play.


The intellectual sparring is directed by Mamet himself and LuPone and Winger handle their roles with control and assurance. The set consists of a desk and a conference table of the simplest kind. Cathy is dressed plainly and it does not resemble a prison uniform. Ann wears business attire.


The anarchist meets the state and complains about the power of the state as she tries to convince or cajole its representative into releasing her. We are not aware what she was rebelling against and was prepared to and in fact committed murder for her cause. The state says we have punished you but your accomplice got away with murder. Where is she? You may have found Christ, philosophy, charity and grace but the state has more mundane interests like justice.


Despite fine performances by the two actors, the play is unconvincing despite and perhaps because of all its intellectual paraphernalia. I would ot dare to give Mamet any advice on playwriting or directing but I can be helpful to anarchists and would-be murderers. If you decide to adopt Cathy’s unique method of expressing your disagreement with the social order, you are better off to do it in Canada. Here you will be eligible for parole after a mere 25 years of leisure as Her Majesty’s guest and we do not have capital punishment.
_______