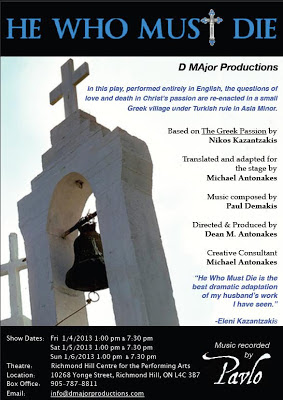 
What was the first modern Greek play to be produced in the United States?


Your chance of getting that right is less likely than winning the next $50 million lottery. There are some exceptions of, course, especially if you are the son of the man who produced the play.


The play is called He Who Must Die and it is an adaptation of Nikos Kazantzakis’s great novel Christ Re-Crucified. It was staged at the Yale School of Drama in 1960. The adapter of the play was Michael Antonakes. The play was produced again in 1972 at Salem State University, in Salem, Massachusetts and Eleni Kazantzakis, Nikos’s widow was in attendance.


Skip forty years and land in Toronto (well, OK, Richmond Hill!) where you will find He Who Must Die being produced by an ambitious and talented young man named Dean Antonakes, the son of Michael.


The production of a play, any play, may not seem like a momentous event. But consider the following: Modern Greek drama in Toronto, where the largest number of Greek-Canadians reside, is almost non-existent. Nancy Athan-Mylonas keeps the theatrical flame flickering as the Artistic Director of the Greek Community of Toronto’s Nefeli group. She has produced a version of Kazantzakis’s Zorba the Greek but her focus is on light comedy done mostly by young people for an audience that prefers song and dance to serious theatre.


After Nancy, the desert.


Dean, who in real life runs a software company, is producing He Who Must Die in order to introduce Canadians to a play by Kazantzakis and to pay homage to his father on the 40th anniversary of the last production of the work.


No production of a play can ever be classified as a one-person operation but this venture comes awfully close. Dean has spearheaded just about everything about the production from the idea, to contacting Greek organizations, to finding a theatre, to raising funds and to keeping everything flowing,. His official title is Artistic and Music Director of the company.


The play is directed by Andrea Emmerton who has more than 25 years of experience in directing plays.


Christ Re-Crucified (sometimes translated as The Greek Passion) is set in a Greek village under Ottoman rule in 1922. The villagers are putting on a play that will re-enact about Christ’s crucifixion. At the same time, a group of refugees arrives at the outskirts of the village seeking help. As the title suggests, the result is an enthralling story.


“The play forces people to face their own Christian values” said Dean in a recent interview. It is done entirely in English and he hopes that young people, including children, will be exposed to the play and to Kazantzakis in general.


The play has a Narrator and mezzo-soprano Ariana Chris has accepted the role. Dean considers this a happy coup. Chris is well-known in the operatic and Greek community and is “a major plus” to the production.


“All of the speaking roles have been cast to experienced stage actors, eleven of whom are Greek-Canadians. We are still looking for ten adult male extras,” according to Dean.


The production will feature music composed by Paul Demakis and played by famed instrumentalist Pavlo on guitar and George Vasilakos on bouzouki and baglama. Samples of the music are available on the production company’s website (see below).


His father Michael taught in the English Department of Salem State University from 1965 until his retirement in 1992. His specialty: Greek literature, especially Kazantzakis. In fact, Michael’s doctoral thesis and much of his writing are centered on Kazantzakis. He also translated Kazantzakis’s Russia: A Chronicle of Three Journeys in the Aftermath of the Revolution with Thanasis Maskaleris.


He studied for one year in Athens and has written, directed and acted in over 40 productions, according to his son. In fact, he is a member of Actors Equity, the union of professional actors.


When son Dean was getting ready to join the matrimonial sweepstakes, the Antonakeses took no chances: they shipped him off to an AHEPA convention where he found, Nina, a nice Canadian girl of Greek origin. She took no chances with him being swallowed by Americana and brought him to the safe haven of Pickering, Ontario. Now she gets to do the marketing for the play.


Professor Antonakes will give a lecture entitled "A Tribute to the Life of Nikos Kazantzakis" on Saturday October 13, 2012, 1:00 pm at the Gold Room of the North York Memorial Community Hall, North York City Centre, 5100 Yonge Street, Toronto.


Dean makes no secret of his enthusiasm for the play and the production. He does not hesitate to classify the staging as the Greek cultural event of the decade, exclamation mark included.


That truthfulness of that assessment will depend on higher judgment, more theatrical experience and unambiguous objectivity. No, I do not mean the audience. I mean his father.
__


He Who Must Die by Michael Antonakes based on Christ Re-Crucified by Nikos Kazantzakis will be performed six times between January 4 and 6, 2013 at the Richmond Hill Centre for the Preforming Arts, 10268 Yonge St. Richmond Hill, Ont. For more information go to http://www.dmajorproductions.com/ or 905-787-8811

Email ThisBlogThis!Share to TwitterShare to FacebookShare to Pinterest
Labels: PEOPLE