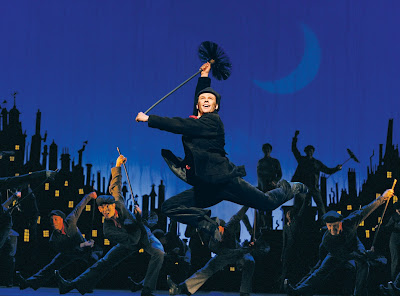 Walking up the wall and on the ceiling; flying across the stage, over the audience and landing back on the stage using an umbrella: these are some of the hijinks offered in Mary Poppins, the delightful musical now playing at the Princess of wales Theatre in Toronto.

The story of Mary Poppins, the nanny with magical powers, started as a series of children’s books by P. L. Travers and hit the big times and big screen in the 1964 Walt Disney movie of the same title. The movie had Julie Andrews as the marvelous nanny with Dick Van Dyke as Bert and major comic talents such as Ed Wynn and Arthur Treacher. The film garnered numerous awards and added the word supercalifragilisticexpialidocious to the English language. The movie is exceptionally enjoyable.

Forty years after the movie opened Cameron Mackintosh brought out a stage version of the film with some changes. The 2004 London production made it to Broadway and road companies have taken it just about everywhere. It has now reached Toronto and one has to admit that Mary Poppins provides marvelous light entertainment on stage especially for the young who seemed to be enjoying it even more than the adults.

The musical contains most of the songs composed by Richard M. Sherman and Robert B. Sherman for the movie as well as some new songs by George Stiles and Anthony Drewe. Richard Eyre, who directed the London production, directs this staging as well and he is as good as they come in the business.

What happens? Well, lots! George Banks (Laird Mackintosh) is a banker and the head of a British household in the early 1900’s. He is a strict disciplinarian while his wife Winifred (Rebecca Thornhill) is an indulgent but flustered mother. They have two ill-behaved children, Jane (Camden Angelis) and Michael (Reese Sebastian Diaz), a hilarious cook (Valerie Brill) and a servant (Dennis Moench).

The children are smart, rambunctious and cute. But they are badly behaved and the current nanny is storming out and everything is in an uproar at the Banks residence.

We have already met Bert (Nicolas Dromard), a jack-of-all trades who can sing dance and be funny – a Bert and Dromard that we can definitely take to. But we now need the big star. No sooner than the Banks children wish for a perfect nanny than Mary Poppins (Megan Osterhaus) descends.

She is pretty, with a lovely voice, has extraordinary powers and a bagful of tricks that can delight the most hard-to-please children and even adults. Osterhaus is splendid in the role.

Plot complications abound, of course, from banking and business issues to a visit with the Bird Woman (Janet McEwen) where you “Feed the Birds” and Mrs. Corry (Michelle E. White) who sells words like “Supercalifragilisticexpialidocious” and even if the sound of it may be atrocious it makes for a very invigorating song.

You do not need “A Spoonful of Sugar” to make this musical with its delightful comic scenes and very vigorous dancing go down. You will “Step in Time” with Mary, Bert and the Chimney Sweeps, “Chim Chim Cher-ee” down Cherry Tree Lane, feel like you want to “Fly a Kite” and in the end have a “Jolly Holiday” and a damn good night at the theatre.
________