THEATER OF ANCIENT MESSENE TO REOPEN 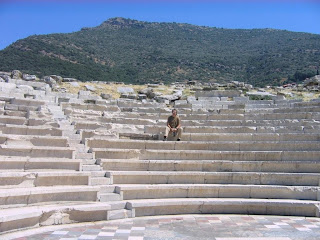 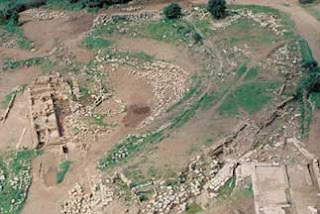 Plans are afoot to reopen the Theater of Ancient Messene.

Nikos Dionysios, director, actor and choreographer, has organized the Dionysios Theater Company with a view to producing ancient drama at the site as early as next summer. In fact he wants to stage Euripides’s The Bacchae and hopes to take the production on tour.

Dionysios, with his deep roots in Messinia, wants nothing less than a cultural revival of the south-western corner of Peloponnesus. He envisions not just theatrical productions but exchanges with other companies, workshops and conferences on the theater.

Your knowledge of the prefecture Messinia may go no further than eating Kalamata olives and you may not have heard of Ancient Messene and its theater at all. You are not alone. Systematic excavations of the site did not begin until 1986 and there is still much work to be done.

Ancient Messenia did not have particularly cordial relations with its neighbors, the Spartans, and its citizens ended up as helots of the latter. In 369 BC, they achieved independence and the Theban General Epaminondas built the city of Messene as the new capital.

Ancient Messene is the best-preserved city of southern Greece. It is located in the Municipality of Ithomi about 20 kilometers from Kalamata, and was probably the most-ignored site in Greece. Ancient Messene has a stadium, an assembly hall (Vouleftirio) and a theater. The stadium is useable as a theater and can hold up to 7000 people according to Dionysios. The assembly hall can accommodate about 700. The theater should be ready for use in two years and will hold about 4000 spectators.

“I want to capture the poetry of Ancient Greek tragedy” said Dionysios in a recent interview at a café overlooking Ancient Messene. “Greek tragedy is poetry, music and movement” he added “and we need to reach back to those elements even in translation”

“Take the Chorus, for example” he continued. “They spoke in unison, they chanted and they danced. You rarely if ever see Greek Tragedy performed that way these days.”

Dionysios trained and worked under the legendary director Karolos Koun. He has performed in theatres ranging from the Odeon of Herodes Atticus and Epidaurus in Greece to venues in Europe, Hong Kong and North America. Ephemera, his first work as writer and director was distinguished as the Best Production of the Year.

He has also created Masks, a production based on ancient poetry, and Bolero, a play based on the life of Isadora Duncan, among others.

In 2003 he directed Aristophanes’ The Birds at the Stratford Shakespeare Festival in Canada. That was the first time that the Festival had staged Aristophanes in its fifty years of existence.

In 2007, he directed and choreographed Aeschylus’s Seven Against Thebes with the Corfu Regional Repertory Company. In 2008 he directed, choreographed and acted the role of Dionysus in The Bacchae with the same company. The production was seen and well received in Albania and in southern Italy.

Kostas Georgakopoulos, the mayor of the Municipality of Ithomi, sees a great opportunity for the cultural and commercial development of the area. “It will be easier to go from Athens to Ancient Messene than from Athens to Epidaurus when the new highway is completed” he pointed out as he looked at the ancient site and on the spectacular vista of hills beyond.

Christos Athanasopoulos, the President of the Council of Ancient Messene nodded in agreement.

Excavation of the theater at Ancient Messene revealed the startling fact that it had a moveable and removable stage. The stage was mounted on large wheels and it could be moved forward towards the audience. The stage was as much as five meters (15 feet) off the ground. The reason for the construction of a moveable stage is not certain according to Petros Themelis, the archeologist who has spent more than 20 years excavating the site.

It was thought that the moveable stage was a Roman invention that the Greeks had copied after the conquest of Greece by the Romans. This appears not to be so and in fact the theater at Ancient Messene proves the reverse: the Romans copied the idea of a moveable stage from the Greeks. The stage was also completely removable. It was put away in storage at the end of the performance.

“I don’t expect to have a moveable stage” commented Dionysius “but I do want to see prominent theatrical companies from Europe to stage high-quality productions in Ancient Messene. It would be marvelous for people to see how other directors and actors treat Greek tragedy” he said.

Asked about how he plans to finance his vision, Dionysios commented that productions in ancient Athens used to be paid for by wealthy Athenians called “chorigoi”. “In fact there was a very rich and powerful family here called Saethidas during Roman times. They spent a lot of money to preserve the theater. I am checking out if there are any of them still around to repeat what their ancestors did two thousand years ago” he said. “If not we will have to rely on modern day Saethidases and local support.”

“Look what Herodes Atticus did. He built a theatre to commemorate his wife and two thousand years later his name is still a household word for theatre lovers in Greece. Not a bad monument!” he continued.

“Culture is good for business and business is good for culture” he added. Just imagine what even a few thousand visitors to an area can do for its economy. You can look at any number of examples from Canada to Europe where cultural events give a tremendous boom to a community” he concluded.

Mount Ithomi had a sanctuary in honour of Zeus Ithomatas. In the 16th century the Monastery of Voulkano was built over Zeus’s sanctuary. There was also in all likelihood a sanctuary dedicated to Dionysus, the god of the theater.

“We have pagan and Christian representatives close at hand” commented Dionysios with a smile. “With local help and maybe a modern Saethidas or Herodes Atticus, the theater of Ancient Messene may be up and running again after a couple thousand years of darkness.”
Posted by James Karas at 2:42 PM